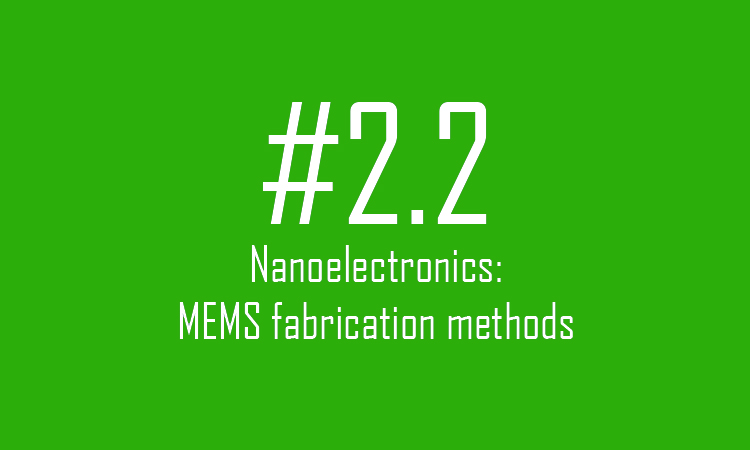 MEMS fabrication is based on high volume IC batch technology. This fabrication method is based on the creation of thin semiconductor layers on the silicon substrate through the methods of chemical etching and lithography, thin film techniques and bonding.

So the fully functional device is created by the deposited two-dimentional layers and their interraction. Photolithography is a technique of coping the major pattern on the semiconductor layers, for creation of an integrated circuit.

Ultraviolet provokes a chemical reaction with photoresist, where it is not covered with the mask. The photoresist can be negitive or positive and the rinsing solution removes exposed or unexposed photoresist, depending on it’s type. Next the silicon dioxide layer is removed, except the dioxide layer that is served as a pattern of a mask. These mask dioxide layers in a MEMS structure serve as a mask for further Patterning, etching or creation of new layers.

The base material for MEMS creation is a silicon, for several reasons – Si is the central material for integrated circuit batch fabrication, its crystaline lattice is good for the creation of further semiconductor layers, and it is cheap. The silicon may have different cristaline lattices, depending on its cirtaline indices. It is important as it makes a big difference for the solution rates. Sometimes germanium or gallium arsenide can be used for these substrate purposes, but silicon is still preferable.

The additive laterials for further MEMS layers are different depending on the layer purposes and functions – it can be metallic or silicon compounds, metals, organics and ceramics.

Wet etching of a silicon substrate is a process of removal of silicon with the immersion method to the bath with the liquid etchant. Etchant can be isotropic or anisotropic. The first type of etchant etches with the same rates in all directions, but the etching rate can be slowed down for the creation of narrow holes. The most frequent isotropic etcahnt is HNA.

The surface micromachining process is based on the creation layers of a semiconductor on the top of the substrate, in the form of thin films. These layers can also be used as spacers, that should be removed during the MEMS production process for creation of proper structures.

The structural layers are usually made of silicon or silicon nitride, and the spacers are usually oxides. The layers are deposited and dry etched by a special order. Every next layer usually increases the structure complexity. The last layer is usually wet etched.

There are four levels of complexity of MEMS devices:

The surface micromachining process is a very successful method because it allows the creation of complex and multi-level MEMS devices. The etching processes are very important during MEMS device preparation, and they determine the sticking effect of the MEMS layers. So, phenomena like the capillar effect, Van der Waals force and other microprocesses won’t hinder the MEMS from its proper functionality.

The fusion bonding technique is used to create complex MEMS structures. This technique is about the creation of seamless structures of different layers with the thin film deposition process or mechanical ways like heating. The full structure becomes very robust, because the structural indices of the layers are close to each other.

HARM or high-aspect ratio micromachining is another method of MEMS manufacturing, based on the bonding process, followed by the injection moulding process. This is the best technology from the performance-to-cost ratio criteria. The HARM technique includes the so-called LIGA technology, which is derived from the German terms for lithography, electroforming and moulding. To use this technique, only high aspect ratio materials are required. It employs X-rays mask processes in the X-ray synchrotron facility.

There are many more micromachining methods to create the MEMSes, but the techniques above are the most frequent used and successful.