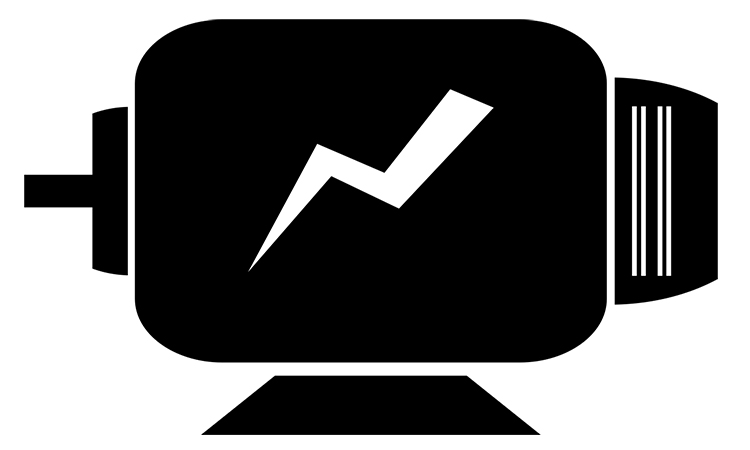 Note that the torque is at maximum when the angle between them is 90 degrees. The field winding wire of the DC machine is usually on the stator, and the armature wire is usually the rotor wire. To keep the torque angle constant, a commutator usually used. 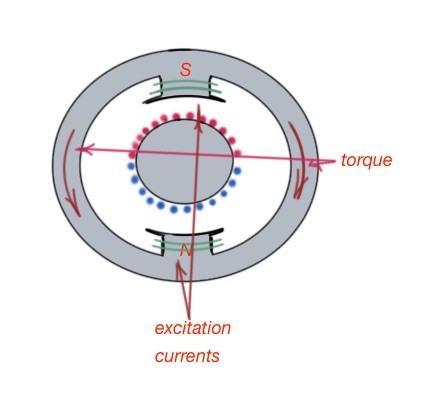 The scheme of the DC electric machine.
DC-machines can be separately-excited – when the excitation is external, self-excited, or when the excitation goes from the armature voltage. Another type of DC machine is the shunt connected machine, where there is a resistor in series, connected to a field circuit.
Let’s consider the equations and formulas describing the work of DC machines. When the field excitation is established, there is a magnetic flux and the field current goes through the circuit. The torque will be .
The generated mechanical power will be . The armature conductor rotation in the magnetic field generates the back electromotive force. , the  and  are constants that depend on the geometry of conductors.
The dissipated power will be . The general formula for the constant is ,  is the amount of magnetic poles,  is the number of conductors per coil,  is the number of parallel paths per armature winding.

The speed of rotation of electric machine is usually measured in revolutions per minute.

are the equations for armature and field circuit top and bottom.

The dynamic torque equation is the following: .

Due to the presence of the magnetic core in the structure of a DC machine, the armature voltage is non-zero when no field current is present. When the field current starts to flow, the back electromotive force is generated in the armature. The most used configuration is when the DC generator contains series shunt and series filed wiring. This generator can be described with the following equations:

Electric motors are pretty much the same from the point of view of their analysis, but with inverted input and output. The motor can be described with the following equations: