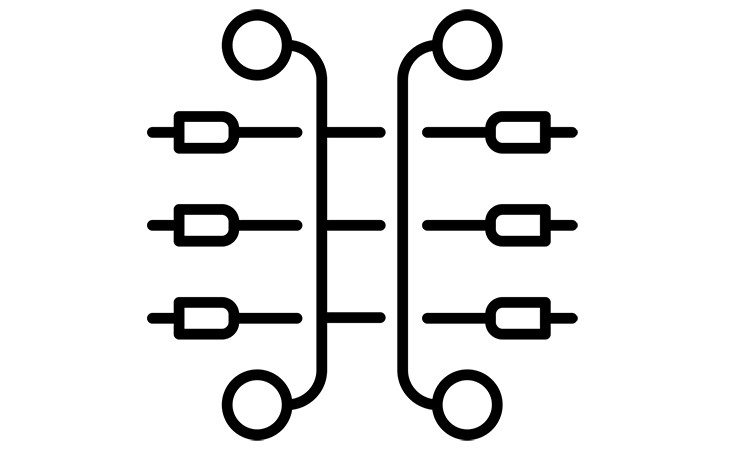 In this post we will learn about AC circuits, magnetic circuits and transient processes in these systems, and other aspects of complex circuits.

Current for single-phase circuits can be described by the formula:

The maximum rating of this current is magnitude ,  is the period – time of one current oscillation.

The is called phase and it characterises the state of the oscillating system at a certain moment. Single-phase current is described by the formula: .

The same formulas can be used for the sinusoidal voltage and sinusoidal EMF.

Also the effective value of the sinusoidal quantity is very useful: .

The same parameters can be calculated for both voltage and EMF quantities.

Let’s compare the thermal action of AC and DC current flowing through the conductor. The heat per limited period of time generated by the AC current should be equal to the heat generated by DC current.

for AC current  and is for DC current. Then , and .

We can conclude that the effective value of the periodically changing quantity is equal to the static quantity per certain period of time.

Another important parameter is magnitude coefficient which can be determined as the ratio of the magnitude of periodically changing signal to it’s effective magnitude .

Form coefficient is the ratio of the effective quantity of the signal function to it’s average value for the half-period:

So power is a time dependent function, consisting of the constant part and time-variable part.

The inductance element can be presented as an ideal inductance and a resistor in series. Self-inductance magnetic flux and voltage can be found by the formulas:

You can also draw a current, voltage and power graphs on the same plot to see how they are related. The parameter is called inductor quality. Bigger , smaller .

If the voltage of the capacitor is constant, then it’s charge is constant too, then: .

When the voltage is a time variable function, then .

You can also draw the graphs for  and  on the same plot to check if they are out of phase.

The following relationship between current and voltage works    where is the capacitor resistance.

Instantaneous power here for the capacitor element is .

In the third and forth quarters of the period, the capacitor behaves the same. First it is consumes energy, then it gives energy back to the source. The following equity is true for the capacitor  then .

The capacitor quality factor is   .

Let’s consider an AC circuit on the picture below. The Kirchhof equation can be created for this scheme. In this equation we will replace current i with the current magnitude , the voltage on the resistor will be , voltage of the inductor will be , and capacitor voltage is:

The  multiplier in these equation is caused by the differently phase-oriented circuit elements according to the current orientation.

This method is called symbolic method, and it  uses the images of complex numbers.

The multiplier   is a complex number that represent resistance on the complex plane, measures with Ohm, and is called complex resistance:

It is called the Ohm law for the sinusoidal current circuits. Generally speaking complex resistance can be written in the following form , where  is active resistance, is a reactive resistance.

The term of complex conductance. Active and reactive power