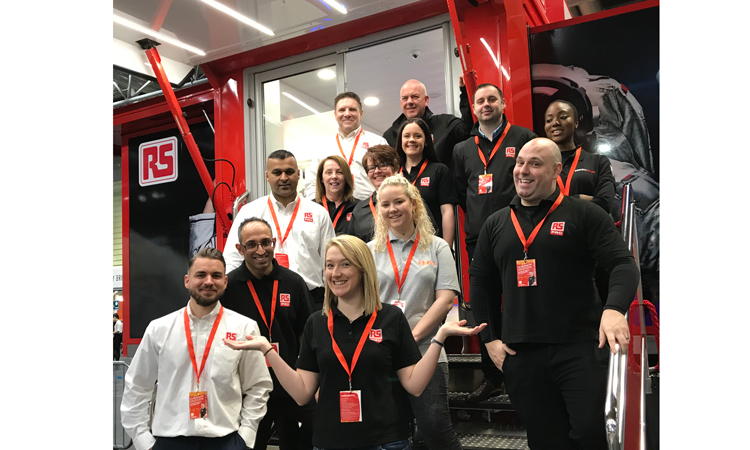 RS Components is set to take its innovation truck Titan II to The Big Bang UK Young Scientists & Engineers Fair – the largest celebration of science, technology, engineering and maths (STEM) for young people in the UK.

For the first time, RS will join key supporters of the show being held at the NEC in Birmingham from 14th-17th March, including the Army, Royal Navy, BBC Learning and the Institution of Engineering & Technology (IET).

The Big Bang Fair highlights to young people (primarily aged 7-19) the exciting and rewarding opportunities available to them, by bringing classroom learning to life.

RS Education Events Manager, Laura Giddings said: “We’re delighted to be bringing Titan II truck to the biggest and best show in the UK, which is core to inspiring budding young engineers and technologists, promotes STEM subjects to study, and highlights careers in engineering. These objectives are fundamental to our For The Inspired campaign and STEM strategy, for which the truck is a key part.

“We’re committed to addressing the engineering skills shortage by educating and inspiring the next generation of engineers, and as a key partner of the Year of Engineering, The Big Bang Fair is an ideal platform to showcase our dedicated work in this area.”

As well as giving demonstrations on Titan II of the latest technology used in industry, there will be opportunities for fair goers to learn coding using Pi-tops and Mirobots, and to win a prize on the RS Wheel of Fortune, as well as the chance to enter into RS’ year long campaign to design a new panel for Titan II.

There will also be an expert team from RS on hand on the truck, as well as support from two RS suppliers – Brainboxes and igus robotics – plus support from STEM ambassadors from the local STEM hub community in the Midlands.

Furthermore, visitors to Titan II will also be able to see and hear about the newest release from Raspberry Pi (launched on Pi Day – 14th March). The Raspberry Pi 3 Model B+ can help teach young people to programme/code with free of charge resources.

Visitors to Titan II at the Big Bang Fair will be able to enter a raffle, and be in with a chance to win one of the 20 new Pi 3B kits. The lucky winners will receive their prizes in April.

The Big Bang Fair is an event growing in popularity, having increased attendee numbers from 6,500 in its first year (2009) to more than 70,000 in 2017, and is made possible thanks to the collaborative efforts of over 200 organisations involved with promoting STEM.