Home ⁄ StudentZone ⁄ What is phase and why do we care?

After the introduction of the SMU ADALM1000 let’s continue with the sixth part of our series with some small, basic measurements.

Now let’s get started with the next experiment.

The objective of this lab activity is to understand what is meant by the phase relationship between signals and to see how well theory agrees with practice.

We will investigate the concept of phase by looking at sine waves and passive components that will allow us to observe phase shift with real signals. First we will look at a sine wave and the phase term in the argument. You should be familiar with the equation: ,  sets the frequency of the sine wave as  progresses and  defines an offset in time that defines a phase shift in the function.

Now let t vary with time like it normally does. When the value of the ωt changes linearly with time, it yields a sine wave function as shown in Figure 1. As ωt goes from  to , the sine wave goes from 0 up to 1 down to –1 and back to 0. This is one cycle or one period, , of the sine wave. The x-axis is the time varying argument/angle, , which varies from 0 to 2π.

The value of  is 0 in the function plotted in Figure 2. Since the , the plot starts at 0. This is a simple sine wave with no offset in time, which means no phase offset. Note that if we are using degrees,  goes from 0 to 2π or 0 to 360° to yield the sine wave shown in Figure 2.

is the time offset or phase portion of Equation 1. The phase angle defines the offset in time and vice versa. Equation 2 shows the relationship. We happened to choose a particularly common offset of 90°. The phase offset between a sine and cosine wave is 90°.

When there are two sine waves displayed, for example, on a scope, the phase angle can be calculated by measuring the time between the two waveforms (negative to positive zero crossings, or rising edges, can be used as time measurement reference points in the waveform). One full period of the sine wave in time is the same as 360°. Taking the ratio of the time between the two waveforms, dt, and the time in one period of a full sine wave, , you can determine the angle between them. Equation 2 shows the exact relationship.

Where T is the period of the sinusoid.

For capacitors and inductors, the equation relating V to I is similar. V/I = Z, where Z is an impedance with real and imaginary components. We are only looking at capacitors in this exercise.

The basic rule for capacitors is that the voltage across the capacitor will not change unless there is a current flowing into the capacitor. The rate of change of the voltage (dv/dt) depends on the magnitude of the current. For an ideal capacitor, the current i(t) is related to the voltage by the following formula:

is defined as the angular velocity: .

One subtle part of Equation 4 is the imaginary operator j. For example, when we looked at a resistor, there was no imaginary operator in the equation for the impedance. The sinusoidal current through a resistor and the voltage across a resistor have no time offset between them because the relationship is completely real. The only difference is the amplitude. The voltage is sinusoidal and is in phase with the current sinusoid.

This is not the case with a capacitor. When we look at the waveform of a sinusoidal voltage across a capacitor it will be time shifted compared to the current through the capacitor. Imaginary operator j is responsible for this. Looking at Figure 4, we can see that the current waveform is at a peak (maximum) when the slope of the voltage waveform (time rate of change ) is at its highest.

The time difference can be expressed as a phase angle between the two waveforms, as defined in Equation 2.

Note that the impedance of a capacitor is wholly imaginary. Resistors have real impedances, so circuits that contain both resistors and capacitors will have complex impedances.

To calculate the theoretical phase angle between voltage and current in an RC circuit:

where  is the total circuit impedance. Rearrange the equation until it looks like:. Where  and  are real numbers. The phase relationship of the current relative to the voltage is then:. 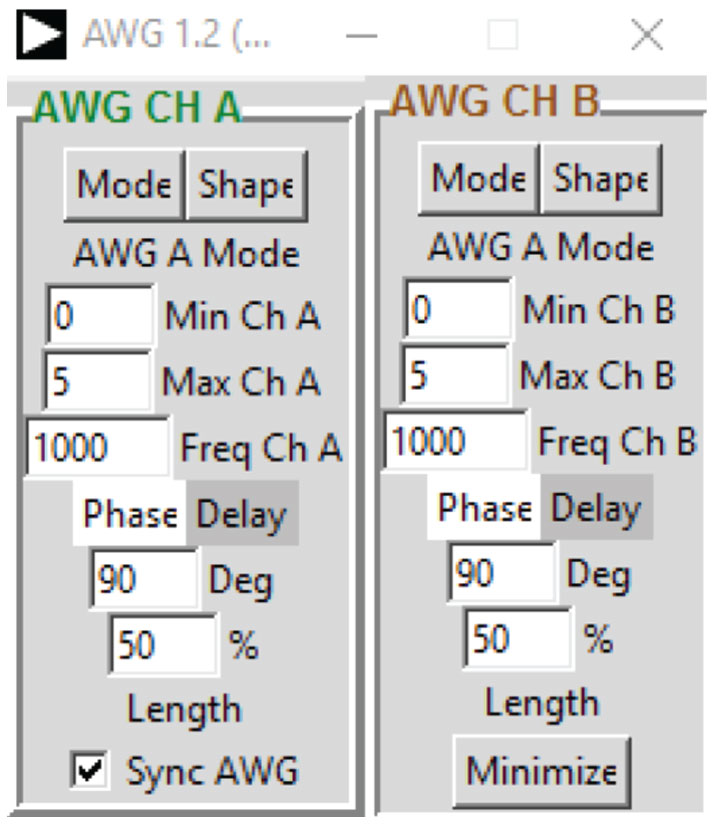 If the board has been calibrated correctly you should see one sine wave on top of the other, with CHA and CHB both equal to 5.00 V p-p. If the calibration isn’t correct, you might see two sine waves in phase with the amplitude of CHA different from CHB. Recalibrate if there is a significant voltage difference.

Measure the time difference (dt) between the CHA and CHB signal zero crossings by using the markers.

Note that you cannot measure the frequency of a signal that does not have at least one full period displayed on the screen. Usually you need more than two cycles to receive consistent results. You are generating the frequency so you already know what it is. You don’t need to measure it in this part of the lab.

Can you see any difference between the zero crossings of VR1 and VR2? Can you even see two distinct sine waves? Probably not. There should be no observable time offset and, thus, no phase shift.

4. Measure the magnitude and phase of a real RC circuit.

Because there is no direct current through the capacitor, we have to handle the average (dc) values of the waveforms differently.

The markers are useful for determining dt. Here’s how.

Note that the Marker Delta display keeps track of the sign of the difference.

Assume dt is 0 if you can’t see any difference with one or two cycles of the sine wave onscreen.

To remove the markers for the next measurement, click on the red Stop button.

Is there any measurable time difference (phase shift) between the math (VR1) signal and the displayed CA-I current waveform? Since this is a series circuit, the current sourced by AWG Channel A is equal to the current in R1, and C1.

Doug Mercer [doug.mercer@analog.com] received his B.S.E.E. degree from Rensselaer Polytechnic Institute (RPI) in 1977. Since joining Analog Devices in 1977, he has contributed directly or indirectly to more than 30 data converter products, and he holds 13 patents. He was appointed to the position of ADI Fellow in 1995. In 2009, he transitioned from full-time work and has continued consulting at ADI as a Fellow Emeritus contributing to the Active Learning Program. In 2016 he was named Engineer in Residence within the ECSE department at RPI.

Antoniu Miclaus [antoniu.miclaus@analog.com] is a system applications engineer at Analog Devices, where he works on ADI academic programs, as well as embedded software for Circuits from the Lab® and QA process management. He started working at Analog Devices in February 2017 in Cluj-Napoca, Romania. He is currently an M.Sc. student in the software engineering master’s program at Babes-Bolyai University and he has a B.Eng. in electronics and telecommunications from Technical University of Cluj-Napoca.