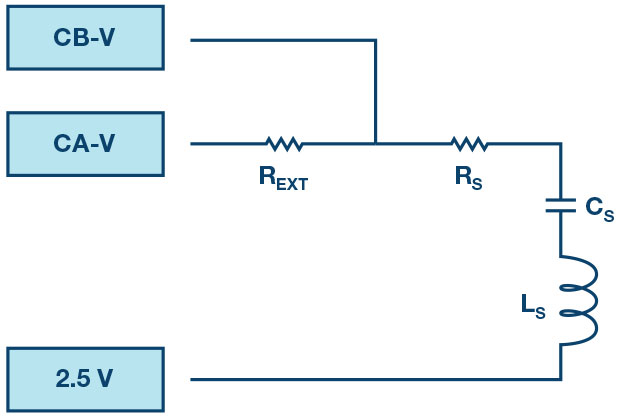 After the introduction of the SMU ADALM1000 lets continue with the fifteenth part in the series with some small, basic measurements.

The objective of this lab activity is to measure component impedance and circuit impedance using the ALICE-VVM Impedance Analyser software and study the magnitude and phase changes with change in frequency for an RLC circuit.

Where ω = 2πf is the angular frequency.

For an inductor, the impedance (or more specifically, the reactance) XL is imaginary and can be represented as a line along the positive y-axis of the 2D plot. The reactance of the inductor also depends upon the frequency and is given as:

The impedance of a series RLC circuit is the sum of the impedances of respective components.

This can also be represented as a phasor vector on a polar plot with:

Measurement of circuit impedance and effects of frequency on the RLC circuit:

Thus, the impedance of the RLC circuit is now just the resistance. The frequency at which this occurs is called resonant frequency. It can be mathematically derived using equation 9 to be:

Table 1. Effects of frequency on an RCL circuit

Scope traces are similarly referred to by channel and voltage/current, such as CA-V, CB-V for the voltage waveforms and CA-I, CB-I for the current waveforms.

Doug Mercer received his B.S.E.E. degree from Rensselaer Polytechnic Institute (RPI) in 1977. Since joining Analog Devices in 1977, he has contributed directly or indirectly to more than 30 data converter products and he holds 13 patents. He was appointed to the position of ADI Fellow in 1995. In 2009, he transitioned from full-time work and has continued consulting at ADI as a Fellow Emeritus contributing to the Active Learning Programme. In 2016 he was named Engineer in Residence within the ECSE department at RPI.

Antoniu Miclaus is a system applications engineer at Analog Devices, where he works on ADI academic programs, as well as embedded software for Circuits from the Lab and QA process management. He started working at Analog Devices in February 2017 in Cluj-Napoca, Romania.