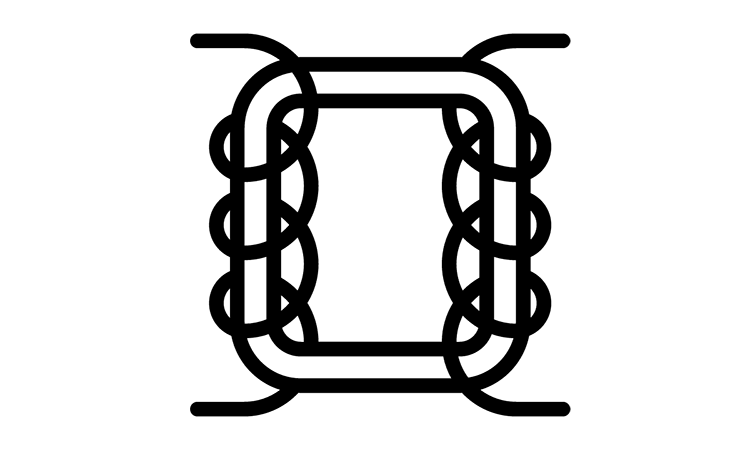 Let’s consider the transformer. In accordance to the Faraday’s Law the EMF .

Here index 2 symbolises the output EMF, or output voltage. Then i.e. the output voltage can be measured as the input terminal voltage multiplied by the ratio of the coil turns of the transformer.

The current  induces the MMF , which is supposed to change the flux ϕ of the core. However, flux  of the core does not change, as the MMF is compensated by the induced input current  MMF . Then  and  .  The constant is called the transformer ratio.

Electromechanical systems can also supply energy or store it. One of the types of transducers are moving-iron transducers, like solenoids, electromagnets and relays. The electromagnet consists of two parts – the fixed and movable part. The movable part can be displaced by the magnetic force. The equation of the energies in this system states that the small amount of energy is

The flux in this system depends on the coil current and the displacement of the movable part of the electromagnet. It does mean that  .

Current and displacement are independent variables  .

In order to simplify the analysis of an electromechanical system and calculate the energy stored in the magnetic field, let’s assume the system is magnetically linear. Then the energy of the magnetic structure is:

So from the formulas above we can calculate the force moving on the movable magnetic structure:

A moving–coil transducer can act as a motor. Here the motor is a moving coil-transducer, with an externally supplied current flowing through the conducting bar, displacing it to the given distance.

Let’s consider a small element  of the moving-coil transducer as depicted below. Here the charge velocity in the current so .

Another class is a generator case, where the generator is a moving-coil transducer, which displaces the moving coil by the external fields converted into the EMF and thus into the electric current through the conducting bar.

If we will consider the device depicted on the figure below, as a part of the system, there should be a current loop, formed by the conducting bar. The conductor moves to the right and generates the EMF, which then gives the current . At the same time there is a force of the magnetic field, affecting the conductor, directed left . So there should be an additional external force,  , directed right.

The electrical and mechanical power for this ideal device is .

The considered transducer should be connected to the voltage source , some resistance , and inductance  as a part of the electric circuit. The transducer should also be characterised by the elastic force  . If the EMF is generated by the transducer  then this device acts like a generator, if the EMF , then the device works like a motor.

Practical transducers are characterised by the inertia, friction, elastic forces, and also inductance, resistance and capacitance. Let’s assume that the friction coefficient is , the conducting bar mass is m and the elastic coefficient is . Then from a mechanical point of view  .

From the electrical point of view

Then the conducting bar velocity and the current is .