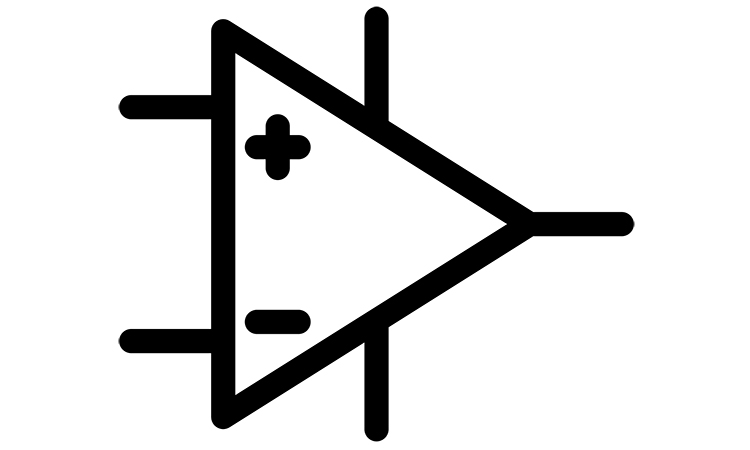 In the non-linear mode transistors act as current-controlled and voltage-controlled switches (below).

The two-terminal p-n junction is the basis for a great variety of more complex semiconductor devices, and the bipolar junction transistor is one of them. The BJT is made by combined semiconductor materials with different doping levels, i.e. it can be formed by the -layer situated between p- and p+ -layers, or p-layer between n– and n+ -layer. These BJTs are called pnp and npn transistors respectively. Schematically these two transistors are depicted below.

The transistor’s work may be understood easily if you recon previous section on how a pn-junction works. Let’s consider a situation  where for transistor – the base-emitter junction operates like a classical  junction, or diode, being forward-biased. The electrons will flow from the emitter to the base, and the holes will flow from base to an emitter.

Here the flow of electrons is heavier, because the layer is more heavily doped. The base here should be much thinner than the emitter. The electrons emitted by the emitter, passing through the base, experience a small recombination. The rest of the of electrons go to the collector and collect there.

So we have a strong current flow from the emitter to the collector oppositely directed to the electron flow. The KCL for the junction is:

As mentioned above the  -transistor operates in the same way as a npn-transistor above, but the charge carriers are reversed. The precise design and operation details of transistors are presented in the VLSI design part of the course.

So, as the transistor is the three-terminal device, two currents and two voltages are sufficient to describe its operation. To do that we must use the KCL and KVL equations. Similarly to that, we must use two characteristics – base current – base-emitter voltage, and collector current – collector-emitter voltage. Figure 4 depicts the typical volt-ampere characteristics for the  BJT Toshiba transistor 2SA1162.

Let’s consider how to determine the operational region of the transistor in a linear mode. Figure below depicts the simple electric circuit for a transistor. Let’s assume we know the voltages . It gives us a voltage emitter-base  and this voltage can tell us if the base-emitter junction is forward- or reverse-biased, and the collector-emitter voltage . Also, we can determine collector and base currents . Finally we can determine the amplification coefficient .

So here we can find the crossing of and that will lead us to the transistor’s operating point  .