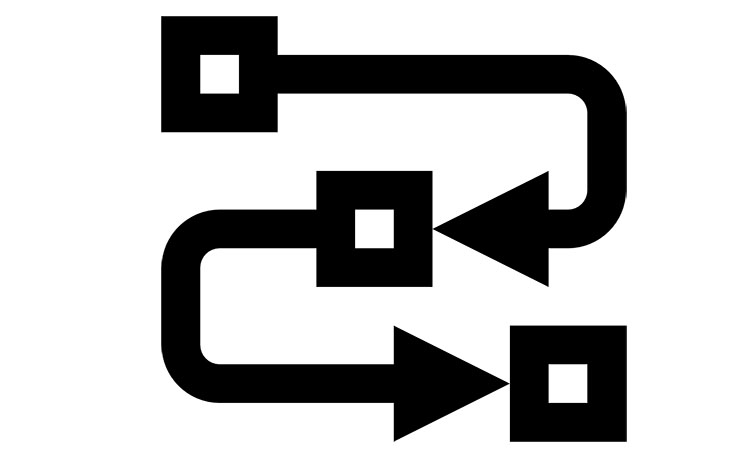 This post covers topic of photolithography process. Before we considered how the simplest CMOS devices work. Every electronic engineer should understand how the devices he designs are manufactured. Let’s consider the fabrication technique step-by-step.

The most famous and biggest among them are TSMC in Taiwan, Global Foundries in the US, UMC in China and Samsung in Korea. Many fabless manufacturers use these fabs for their production needs. TSMC maintains a leading role in the world, investing significantly in R&D.

The 5nm and 7nm CMOS Technologies are already in their pipeline, while R&D work is being made beyond 5nm technology. The company has also presented their road-map for the upcoming years.

Another large and leading foundry is Global Foundries, the leading full-service semiconductor design, development, fabrication and innovation company in the US. As the Taiwan foundry above, it works with different companies interested in developing unique semiconductor products, and having 250 customers all over the world, including the largest semiconductor companies in the world. They have five 200mm fabs and five 300mm fabs in production. Global Foundries are moving forward the leading CMOS technologies of FDX, mainstream and embedded memory; RF technologies like SiG HP and PA, RF SOI and CMOS, ASICs technology and silicon photonics.

The United Microelectronic Corporation (UMC) foundry, based in Taiwan, is another global semiconductor foundry offering advanced IC products. The UMC’s foundry offers its customers solutions of 28nm gate-last High-K/Metal Gate technology, 14nm mass production, ultra-low power platform processes  (that are in use in IoT applications), and also capabilities for automotive, with its highest rated AEC-Q100 Grade-0 of ICs. UMC has several advanced 300mm fabs, some of them manufacturing 14 and 28nm products, seven 200mm fabs and one 150mm fab.

The most famous fabs also belong to Samsung, SMIC, Powerchip, Vanguard, Huahong-Grace, Dongbu, TownJazz, IBM, MagnaChip, and WIN. Many of these companies are located in the Asia region. We will review in detail the processes and technologies that these fabs are offering, when we discuss the basics of CMOS fabrcation.

The first step is wafer fabrication. Wafer is a silicon (sometimes silicon carbide). A silicon wafer is cut from silicon boules. The wafer should be very thin (less then 1mm) in accordance to a process. Boules manufacturing is also a chemical process. They are a single-crystalline silicon, manufactured by pulling from molten silicon.

The size of the boules (or wafers later on) is up to 300mm. The method of silicon boules manufacturing is called as Czochralski method. The silicon electrical properties are obtained by impurities control. The seed goes into the molten silicon to start the crystal growth with the same orientation of the crystal as the seed. The temperature of the process is kept a few degrees higher than the temperature of melted silicon, to prevent it oxidising. After the seed is taken away during the rotation process, so the silicon recrystallises.

At first the wafer is covered or coated with photoresist, which can disappear under certain conditions. The next step is to use a photomask (Figure 1). The photomask is a quartz glass, with applied chromium material with a certain pattern. The photoresist is exposed by an applied UV source, where the mask is not covered by chrome.

The pitch of the printed mask is , where  is the UV light source wavelength,  is the refractive index of the medium, and  is the acceptance angle of the lense. The parameter  is the numerical aperture. This parameter is different for different manufacturing processes. Another important parameter is the depth of focus  .

The term of the critical layer becomes very important with recent techniques. Wavelengths that are comparable or bigger than the feature size cause distortion in the exposed photoresist.

To compensate this distortion resolution enhancement techniques (RET) are used, that modify the parameters of incoming light. Also the ends of the wafers receive less light than the central part. In order to compensate this non-uniformity, optical proximity correction (OPC) is used. Also phase shift masks can be used that are based on the diffraction effect in order to change the thickness of the lines. Off-axis illumination process can improve the contrast for certain types of dense patterns. 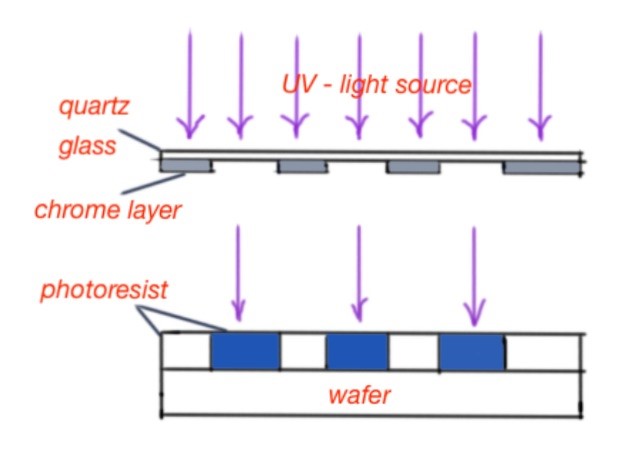