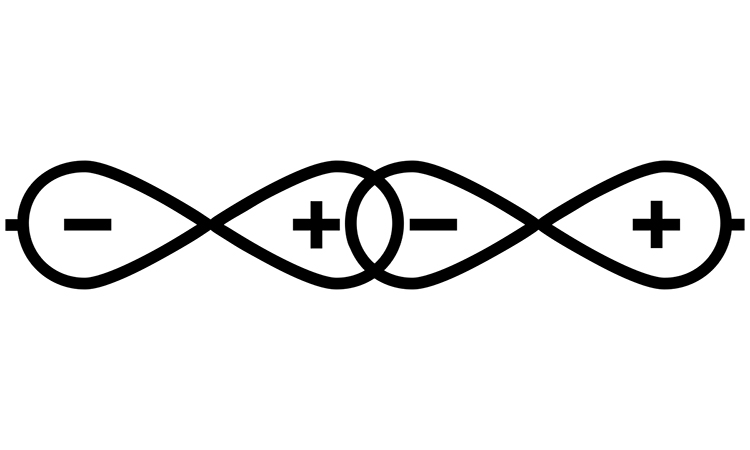 Polarization is a dielectric state when every unit of a dielectric volume has its electrical moment. There are two types of polarisation – occurring in the electric field, and spontaneously. In some cases mechanical stresses can also cause polarisation. The dielectric constant  is a parameter, characterising the ability of some materials to polarise.

Polarity is a vector quantity, measured with

Polarity of homogenous flat dielectric in the uniform electric field is equal to the quantity of coherent electric charges. For most dielectrics, polarity is described by the following:

X is a dielectric’s susceptibility. For isotropic structures vectors P and E are directed the same. For anisotropic – P and E are tensor quantities. In the intense electric field P and E quantities are not linear, so non-linear effects occur in these conditions.

Ionic polarization occurs in solid dielectrics with ionic structure, and is related to elastic displacement of ions in the lattice to the distances less than the lattice period.

Ion shift is hindered by the elastic forces of chemical bonds in a lattice. For the equilibrium qE = kΔx, k, is an elastic force coefficient, Δx is ion shift in the electric field.

There is an electric moment that occurs for two oppositely charged shifted ions:

So ionic impact into dielectric polarisation is considered by the total sum of all electric moments in the compound. When temperature rises the distance between ions increases, and elastic forces are weakened. This leads to the growth of polarisation.

In this case weakly bonded ions shift along to the electric field to distances bigger than the lattice period. When the electric field turns off, ions return to the lattice nodes. Electronic-relaxation polarization occurs due to excited electrons of dielectric structure  defects. Resonant polarization occurs in dielectrics with light frequencies. It is related to physical and chemical properties of the dielectric.

ɛ change with frequency is a dielectric dispersion. Relaxation dispersion is characterised by monotonous decreasing of dielectric constant with raising frequency. For resonant dispersion dielectric constant rises and then falls at high frequencies. Migration polarization occurs in solids of non-homogenous structure with impurities and defects. This type of polarisation is related to huge electric energy dissipation. Spontaneous polarization is inherent to solids like ferroelectrics.

Characterising components distribution in a compound, can be -/+1. Dielectric constant for these kinds of compounds can look like the following:

or the most frequent  .

As an exercise, determine the temperature coefficient for dielectric constant of complex solid compounds:

#12a Shift current – conductivity of dielectrics