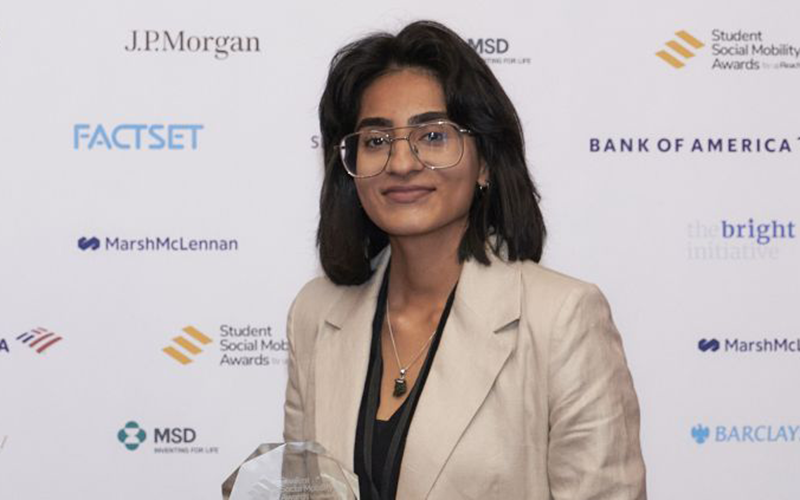 A student who used her grit, resilience and determination to defy the odds has been recognised with a special award at the House Of Lords.

Fiza Aleem, an undergraduate law student at the University of Sheffield, said that a lack of role models with a similar background to hers is a key reason for her desire to break into the law industry.

She has been named one of this year’s upReach Ten at this years’ Student Social Mobility Awards, which recognises Fiza as one of the ten most impressive undergraduate students who have been nominated nationally.

Fiza is the first person to ever be selected to join international consumer goods company Unilever as a legal intern, and is the second person to go to university in her family after her sister.

Fiza said: “The barriers I have faced mainly concern the lack of role models in the legal industry with similar backgrounds to mine. This includes being an ethnic minority, being educated at a state school and identifying with the LGBTQ+ community.

“Due to this, I have at times questioned whether I should pursue a legal career; however, ultimately it has further motivated me to break into the legal industry in order to become a mentor for similar students. Additionally, the teaching quality and career support I have received at the University of Sheffield has further motivated me to pursue a legal career after graduating.”

She added: “Role models are incredibly important for individuals from ethnic minorities and low socio-economic backgrounds, as often these categories have little exposure to mentors.

“Having multiple mentors in various industries has increased my motivation and desire to pursue a legal career and also exposed me to new opportunities. I hope that in the future I can be a mentor and a role model for people with similar backgrounds to me.”

Fiza added: “It is an honour to win an award and for my efforts and hard work to be recognised. My advice to those in a similar socio-economic position to me is to seek out opportunities as they do exist, they are just harder to find!”

The award ceremony, hosted by Baroness Helena Kennedy QC at the House Of Lords, took place last week (21 July 2022) with 250 nominations from 35 universities.

Baroness Helena Kennedy QC, who hosted the awards, said: “The power of education to change a person’s life is close to my own heart. It was education that changed my life as I was the first in my family to go on to higher education and into a profession. So many doors opened in consequence. I want those opportunities to be made available to others like me. That is why these Awards are so important.”