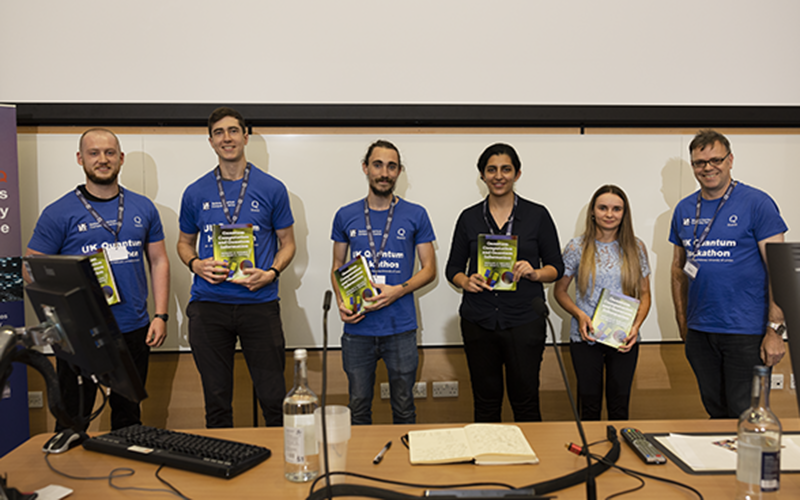 The NQCC in collaboration with QuantX organised a quantum computing hackathon in the UK. The hackathon is part of the NQCC’s Quantum Readiness programme, aimed at exploration and awareness-raising for the current capabilities and limitations of quantum computing technology, as well as at nurturing the talent pipeline and convening stakeholders.

The technical hackathon was also aimed at addressing the whole quantum computing value chain to demonstrate its ability to tackle real-world problems in a variety of sectors.

Nine teams of research students and early-career scientists lined up at the end of July to compete in the UK’s first quantum computing hackathon. Organized by the National Quantum Computing Centre (NQCC) in collaboration with QuantX, the event challenged the teams to devise novel quantum solutions to problems set by end users BT, MBDA, NHS, Rolls Royce, TCS, and Thales.

The hackathon and the SparQ applications discovery programme

The hackathon was the first hands-on event organized by the NQCC to bring together quantum developers, end users and technology providers to work on real-world problems. In May 2022 it launched its SparQ applications discovery programme, which aims to provide end users with an opportunity to experiment with quantum algorithms and hardware for tackling relevant use cases within their sector.

“It’s all about growing the user community for quantum computing,” said NQCC director Dr Michael Cuthbert. “There’s nothing like running a piece of code yourself, and running it on a real quantum computer, to engage with the technology and understand its capabilities.”

Mentors from each of the end-user organizations also worked alongside the teams to offer expert domain knowledge, explain the context for the problem, and guide the hackers towards potential solutions. The challenge set by Rolls Royce, for example, was to predict the lifetime of a jet engine based on data recorded during operation. “First of all I framed the use case, and from there I guided them through quantum machine learning as a possible approach,” commented mentor Jarrett Smalley, one of the company’s specialists in quantum computing.

“They came up with a novel approach that blends some existing ideas together in a new way, and it’s been really cool to watch it develop from nothing to a working model in just two days.”

By the end of the two-day event, several teams had run their algorithms on quantum hardware provided by technology partners D-Wave, OQC, and Rigetti through AWS, in addition to IBM Quantum. Others, who had developed solutions beyond the capabilities of current quantum processors, tested their solutions on quantum simulators, with programming experts from each of the technology providers on hand to provide support and advice.

“We’ve been checking in with the teams throughout the event, and helping with some of the more technical code,” said IBM’s Frank Harkins. “Some have a good vision of where to go and how to use the code, while for some of the others we’ve helped with a bit of the theory and the algorithms.”

Solutions presented by the hacking teams

At the end of the hackathon – just 30 hours after it started the previous day – the teams presented their solutions to all the other participants, as well as to a judging panel that included Cuthbert, Decaroli, and quantum experts from both industry and academia. “All the presentations were amazing,” said Decaroli. “The criteria for us judges were to look at the creativity of the solution, whether the team had investigated the scalability of their approach to more powerful quantum machines, and how well they presented their results and answered any questions.”

Congratulations to the winning teams

The winning team, who named themselves Quassian, had been working with MDBA on a quantum machine learning approach to speed up complex simulations in aerospace engineering. The Rolls Royce group mentored by Smalley came second, while the third went to a BT-sponsored team testing different quantum and classical methods for optimizing the performance of 2D antenna arrays.

“All of the presentations demonstrated huge amounts of work, commitment, and enthusiasm over the last couple of days,” commented Cuthbert, before presenting the prizes to the winning teams. “You have made friends and contacts that will stay with you for the rest of your career, and I hope it is just the start of your engagement with quantum computing and the NQCC.”