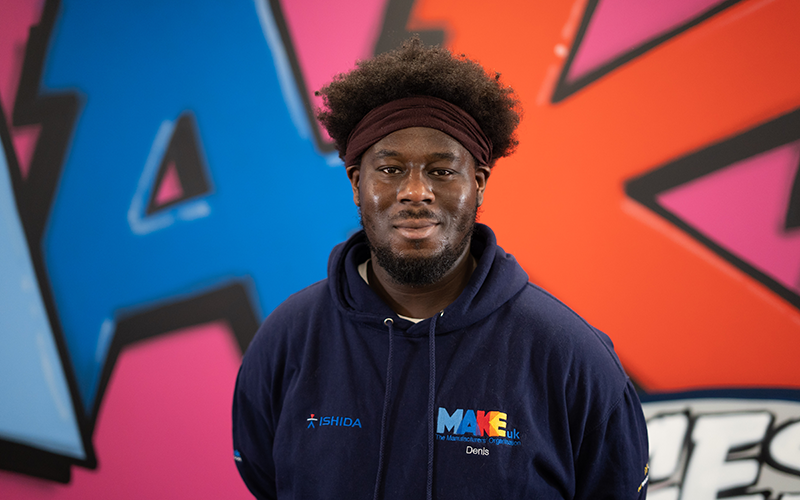 Denis Amaoko-Brown has lived in Wolverhampton for nearly 10 years, having moved there the day his daughter was born. He is now a second-year apprentice at Ishida Europe, based in Woodgate and is training with Make UK. He joined the course as a mature student, after deciding to change careers.

Here are his thoughts on engineering apprenticeships:

“For an apprentice, I’m quite mature – I joined later in life as I decided to change careers. I had past experience in domestic electrical engineering and realised that while electricians are amazing, the job focuses on replacing things rather than fixing a problem. Engineering is the opposite, and that’s what appealed to me.

“I realised early in life that while university is a great path to take, it doesn’t mean you know what you’re doing when you go into the workforce. With an apprenticeship you learn exactly how to do the job, while being paid for it and gaining relevant qualifications. This meant I could support my family while changing into an entirely new industry.

“When I saw the apprenticeship advertised, I fell in love with the company and vowed that if I wasn’t offered a place, I’d apply again the following year. The apprenticeship is perfect for me as I’ve always wanted to do both electrical and software engineering.

“Monday to Wednesday I work in the office developing and engineering software. I also work on the shop floor with the assembly team, as part of the electrical engineering part of my role.

“I’ve worked on some challenging projects — sometimes they take several days to figure out, but the fact that it’s tough makes it such a big achievement. My favourite thing about being an engineer is that feeling when you’ve completed a task that’s been bothering you for hours!

“Ishida is an incredibly supportive employer and has demonstrated how much it cares about its staff during the pandemic. No company has ever made me feel this welcome before.

“This apprenticeship has opened up a world of possibility for me. I would have loved to have known more about apprenticeships when I was younger but for now, I’m enjoying the moment, happy knowing I can take my career wherever I want.”