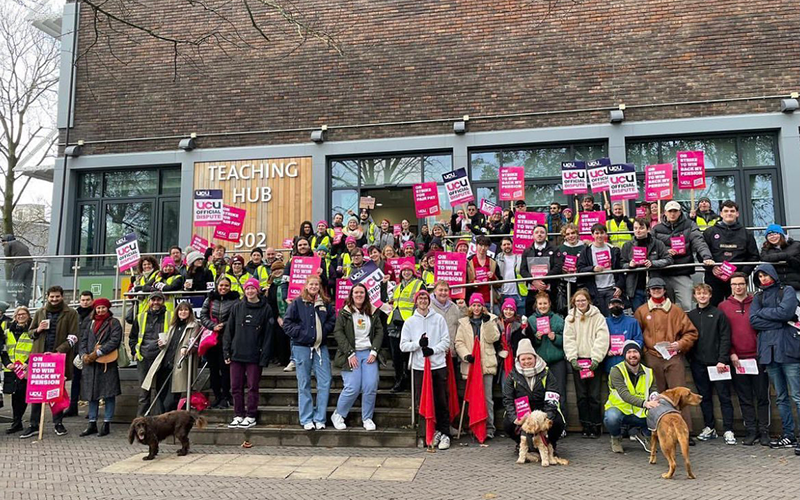 2.5 million students could face disruption as 70,000 university staff begin industrial action in what has been labelled the biggest strike in history of UK higher education.

Tens of thousands of staff, including lecturers, librarians and researchers, are due to take part in the first of three days of strike action over pay, working conditions and pensions.

Lectures have been cancelled for thousands of students, affecting 150 universities.

The University and College Union said the strike, also set to take place on Friday 25th and Wednesday 30th, will bring the sector to a halt.

“Staff are burnt out but they are fighting back and they will bring the whole sector to a standstill,” said the UCU general secretary, Jo Grady, who warned of “even bigger action” in the new year unless there was an improved offer from employers.

Robert Halfon, the minister for skills, apprenticeships and higher education, said it was “hugely disappointing” that students who had already suffered during the pandemic would face further disruption to their learning due to industrial action.

“I urge all sides to work together so that students do not suffer with further learning loss, and I encourage any student worried about the impact of strikes on their education to raise this with their university,” he said.

The National Union of Students vice-president for higher education, Chloe Field, said students supported their lecturers. “We have always been clear that staff working conditions are students’ learning conditions, and for more than a decade both have come under attack from a sector that puts profits above education.”

Raj Jethwa, the chief executive of the Universities and Colleges Employers’ Association, said: “Union leaders must provide their members with a realistic and fair assessment of what is achievable because strike action does not create new money for the sector.”

The National Union of Students is supporting the strikes, however some students are concerned about missing classes and valuable teaching time.

The Universities and Colleges Employers Association (UCEA) said the impact of the strikes on students had been “low and isolated”.

Universities have announced they are putting measures in place to mitigate the impact on students’ learning.