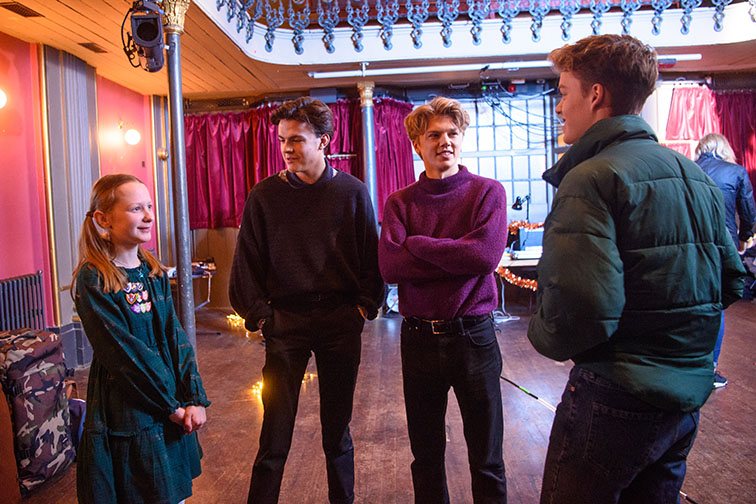 Scenes for new music video for pop trio, New Hope Club, first ever to be engineered by school children.
Blue Peter and The Institution of Engineering and Technology (IET) team up to encourage kids to get into engineering and show the breadth of career opportunities available.
203,000 people with engineering skills required each year to meet demand through to 2024.

The Institution of Engineering and Technology (IET) teamed up with long-running TV favourite, Blue Peter, to help inspire the next generation of British engineers.

To inspire budding engineers and raise awareness of the exciting work that engineers do in the music industry, the ‘Lights, Camera, Action!’ competition was launched in September, and run exclusively through Blue Peter. Entrants were asked to submit a storyboard for a scene within the video, write a paragraph about their favourite engineer and describe how their invention has inspired them.

Dotty (10) from Lancashire won the competition and her design was incorporated into the final video treatment, she also got to act alongside her favourite popstars in the scene. Dotty was joined by two runners-up; Lyla (8) from Buckinghamshire and Freya (12) from Leeds, plus their respective parent/guardian, who attended the music video shoot to create the new music video for New Hope Club.

Taking the lead on the New Hope Club version of ‘All I Want For Christmas,’ the children received the world’s best work experience and helped design, direct and even star in the video – helping their dreams of becoming an engineer move one step closer.

On the shoot, the children learned all about lighting and sound and made their presence felt, ordering cast and crew around to make sure the video matched the storyline of the winner’s vision. Engineers on set were put in their place by the children who called for ‘quiet on set’ and for the next take to start, all of which can be viewed in the behind the scenes video – YouTube.com/TheIET

During the filming for the Christmas song, the children received special mentorship from engineering professionals about working in the music industry, as well as being encouraged to actively contribute to engineering activities during the shoot.

Engineering is part of so many industries, including the music industry, however, it is well documented that we are facing a nationwide skills shortage. 203,000 people with engineering skills will be required each year to meet demand through to 2024, but it’s estimated that there will be an annual shortfall of 59,000 engineers and technicians to fill these roles.

Through initiatives like this partnership with New Hope Club, the Institution of Engineering and Technology is continuously working to excite and motivate young people about the industry and to inspire a new generation of engineering enthusiasts.

Orla Murphy, former IET Young Women Engineer of the Year, said: “We saw a phenomenal response to the ‘Lights, Camera, Action!’ competition, with hundreds of very high-quality entries. As an engineer and musician, it’s fantastic to see young people demonstrating their creativity through engineering and we hope this competition and filming has shown young people the variety of careers there are in engineering, including the music and audio industry.”

Competition winner, Dotty (10), said: “I was so excited to win the “Lights, Camera, Action!,” competition and meet all the Blue Peter team and New Hope Club. My favourite engineer is Dorothée Pullinger, who showed the world that women make great engineers! I really enjoyed working on the video and learning skills that will help me become a great engineer in the future.”

Lindsey Russell, Blue Peter presenter, said: “The standard of the competition was incredible across all age groups. Watching the kids creating the music video was amazing and gave them first-hand experience of how engineering and creativity goes hand in hand. They are certainly engineers in the making – future film sets better watch out, these girls are awesome!”

New Hope Club band member, George Smith said: “The kids were incredible at engineering the music video, and definitely ran a tight ship during the filming!”

Snippets of the new music video from New Hope Club, engineered by children, will be previewed exclusively on Blue Peter on 6th December. Head to YouTube.com/TheIET now to watch an exclusive behind-the-scenes video from the shoot and to see what the winners got up to on-set. The full video will be released on 14th December.