Home ⁄ News ⁄ Inside these fibers, droplets are on the move 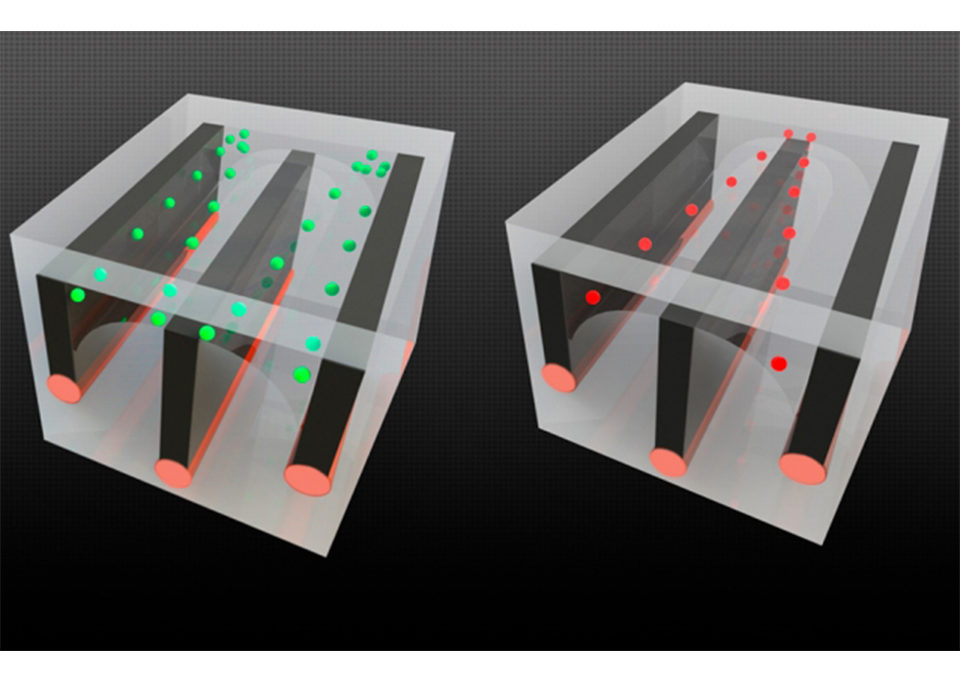 Microfluidics devices are tiny systems with microscopic channels that can be used for chemical or biomedical testing and research. In a potentially game-changing advance, MIT researchers have now incorporated microfluidics systems into individual fibers, making it possible to process much larger volumes of fluid, in more complex ways. In a sense, the advance opens up a new “macro” era of microfluidics.

Traditional microfluidics devices, developed and used extensively over the last couple of decades, are manufactured onto microchip-like structures and provide ways of mixing, separating, and testing fluids in microscopic volumes. Medical tests that only require a tiny droplet of blood, for example, often rely on microfluidics. But the diminutive scale of these devices also poses limitations; for example, they generally aren’t useful for procedures that need larger volumes of liquid to detect substances present in minute amounts.

A team of MIT researchers found a way around that, by making microfluidic channels inside fibers. The fibers can be made as long as needed to accommodate larger throughput, and they offer great control and flexibility over the shapes and dimensions of the channels. The new concept is described in a paper appearing this week in the journal Proceedings of the National Academy of Sciences, written by MIT graduate student Rodger Yuan, professors Joel Voldman and Yoel Fink, and four others.

The project came about as a result of a “speedstorming” event (an amalgam of brainstorming and speed dating, an idea initiated by Professor Jeffrey Grossman) that was instigated by Fink when he was director of MIT’s Research Laboratory of Electronics. The events are intended to help researchers develop new collaborative projects, by having pairs of students and postdocs brainstorm for six minutes at a time and come up with hundreds of ideas in an hour, which are ranked and evaluated by a panel. In this particular speedstorming session, students in electrical engineering worked with others in materials science and microsystems technology to develop a novel approach to cell sorting using a new class of multimaterial fibers.

Yuan explains that, although microfluidic technology has been extensively developed and widely used for processing small amounts of liquid, it suffers from three inherent limitations related to the devices’ overall size, their channel profiles, and the difficulty of incorporating additional materials such as electrodes.

Because they are typically made using chip-manufacturing methods, microfluidic devices are limited to the size of the silicon wafers used in such systems, which are no more than about 8 inches across. And the photolithography methods used to make such chips limit the shapes of the channels; they can only have square or rectangular cross sections. Finally, any additional materials, such as electrodes for sensing or manipulating the channels’ contents, must be individually placed in position in a separate process, severely limiting their complexity.

“Silicon chip technology is really good at making rectangular profiles, but anything beyond that requires really specialized techniques,” says Yuan, who carried out the work as part of his doctoral research. “They can make triangles, but only with certain specific angles.” With the new fiber-based method he and his team developed, a variety of cross-sectional shapes for the channels can be implemented, including star, cross, or bowtie shapes that may be useful for particular applications, such as automatically sorting different types of cells in a biological sample.

In addition, for conventional microfluidics, elements such as sensing or heating wires, or piezoelectric devices to induce vibrations in the sampled fluids, must be added at a later processing stage. But they can be completely integrated into the channels in the new fiber-based system.

Like other complex fiber systems developed over the years in the laboratory of co-author Yoel Fink, professor of materials science and engineering and head of the Advanced Functional Fabrics of America (AFFOA) consortium, these fibers are made by starting with an oversized polymer cylinder called a preform. These preforms contain the exact shape and materials desired for the final fiber, but in much larger form — which makes them much easier to make in very precise configurations. Then, the preform is heated and loaded into a drop tower, where it is slowly pulled through a nozzle that constricts it to a narrow fiber that’s one-fortieth the diameter of the preform, while preserving all the internal shapes and arrangements.

In the process, the material is also elongated by a factor of 1,600, so that a 100-millimeter-long (4-inch-long) preform, for example, becomes a fiber 160 meters long (about 525 feet), thus dramatically overcoming the length limitations inherent in present microfluidic devices. This can be crucial for some applications, such as detecting microscopic objects that exist in very small concentrations in the fluid — for example, a small number of cancerous cells among millions of normal cells.

“Sometimes you need to process a lot of material because what you’re looking for is rare,” says Voldman, a professor of electrical engineering who specializes in biological microtechnology. That makes this new fiber-based microfluidics technology especially appropriate for such uses, he says, because “the fibers can be made arbitrarily long,” allowing more time for the liquid to remain inside the channel and interact with it.

While traditional microfluidics devices can make long channels by looping back and forth on a small chip, the resulting twists and turns change the profile of the channel and affect the way the liquid flows, whereas in the fiber version these can be made as long as needed, with no changes in shape or direction, allowing uninterrupted flow, Yuan says.

The system also allows electrical components such as conductive wires to be incorporated into the fiber. These can be used for example to manipulate cells, using a method called dielectrophoresis, in which cells are affected differently by an electric field produced between two conductive wires on the sides of the channel.

With these conductive wires in the microchannel, one can control the voltage so the forces are “pushing and pulling on the cells, and you can do it at high flow rates,” Voldman says.

As a demonstration, the team made a version of the long-channel fiber device designed to separate cells, sorting dead cells from living ones, and proved its efficiency in accomplishing this task. With further development, they expect to be able to perform more subtle discrimination between cell types, Yuan says.

“For me this was a wonderful example of how proximity between research groups at an interdisciplinary lab like RLE leads to groundbreaking research, initiated and led by a graduate student. We the faculty were essentially dragged in by our students,” Fink says.

The researchers emphasize that they do not see the new method as a substitute for present microfluidics, which work very well for many applications. “It’s not meant to replace; it’s meant to augment” present methods, Voldman says, allowing some new functions for particular uses that have not previously been possible.

“Exemplifying the power of interdisciplinary collaboration, a new understanding arises here from unexpected combinations of manufacturing, materials science, biological flow physics, and microsystems design,” says Amy Herr, a professor of bioengineering at the University of California at Berkeley, who was not involved in this research. She adds that this work “adds important degrees of freedom — regarding geometry of fiber cross-section and material properties — to emerging fiber-based microfluidic design strategies.”

The team included graduate student Jaemyon Lee, Hao Wei Su PhD ’16, and postdocs Etgar Levy and Tural Khudryev. The work was supported by the National Science Foundation, the National Institutes of Health, the Defense Advanced Research Projects Agency, the U.S. Army Research Laboratory and the U.S. Army Research Office through the Institute for Soldier Nanotechnologies at MIT, and the Center for Materials Science and Engineering.