Home ⁄ News ⁄ Do students actually like maths a lot more than they let on? 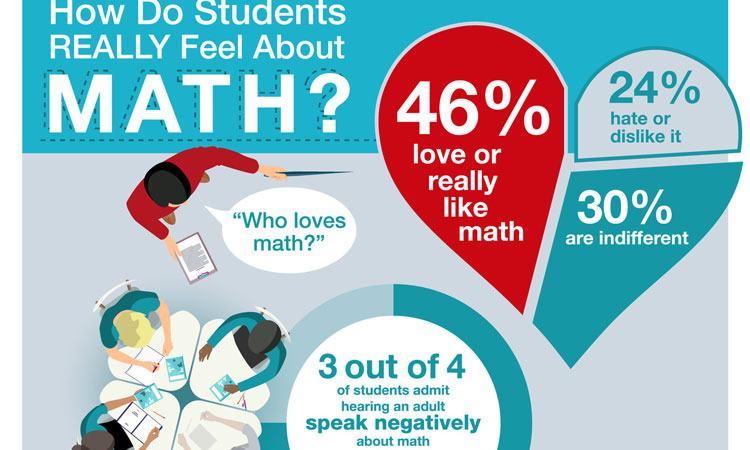 Ask any teacher and they’ve likely heard more than their fair share of students say they hate maths or that it’s too hard and they will never use it.

However, as kids return to school, they might be looking forward to maths classes more than they let on, according to a new study commissioned by Texas Instruments and conducted by Research Now Group.

The survey polled approximately 1,000 students across the US, between the ages of 13-18, to gauge their moods about maths and understand what motivates them as they head back to class.

“There is a misconception in this country that kids hate maths,” said Peter Balyta, Former Math Teacher turned president of TI Education Technology.

“Our findings suggest middle and high school students naturally like maths, so it’s up to us as parents and educators to help kids fuel that passion to develop a deeper understanding of – and hopefully – a lifelong love and appreciation for maths.”

For the love of math
According to the survey data, nearly twice as many students (46%) report they like or love math compared to those who said they hate or dislike it (24%).

The remainder of students (30%) said they were indifferent on the subject. Of those surveyed, a majority (68%) of students indicated they would like math more if they better understood how it applied to their future.

The value of math adds up
Additional findings reveal that three quarters (75%) of students reported hearing a parent or other adult speak negatively about maths with almost half (44%) hearing adults say, “I hate maths.”

Despite what they’ve heard, the vast majority of students see the value in learning maths. Most students (77%) believe that success in maths class equals success in college or career.

Motivated by self, security and salary
As for what motivates students to do their best in maths, many students (55%) cite proving to themselves that ‘they can do it’ as the ultimate motivator, followed closely by a desire to get into a better college (46%) and also landing a better job or career (40%).

Add to that, when students were told that, according to the Bureau of Labor Statistics, the top 20 jobs with the highest median pay require advanced or applied maths skills, most (63%) said that stat would motivate them to work even harder in class.

“At TI, we want to help teachers bring math to life for their students by connecting the things that kids are naturally interested in, from fashion to robotics, and revealing the beautiful, complex math behind it,” said Balyta.

“With a solid understanding of mathematics, students will have the ability and drive to go on to solve some of the world’s biggest problems.”

With this in mind, TI created a series of fun, free activities called ‘STEM Behind Cool Careers’, that helps students see how math skills are a must for any career, even ones they would least expect.

Students can use their TI-Nspire CX or TI-84 Plus CE graphing calculator to explore the maths involved in real life careers from that of a commercial airline pilot to high end fashion designer.