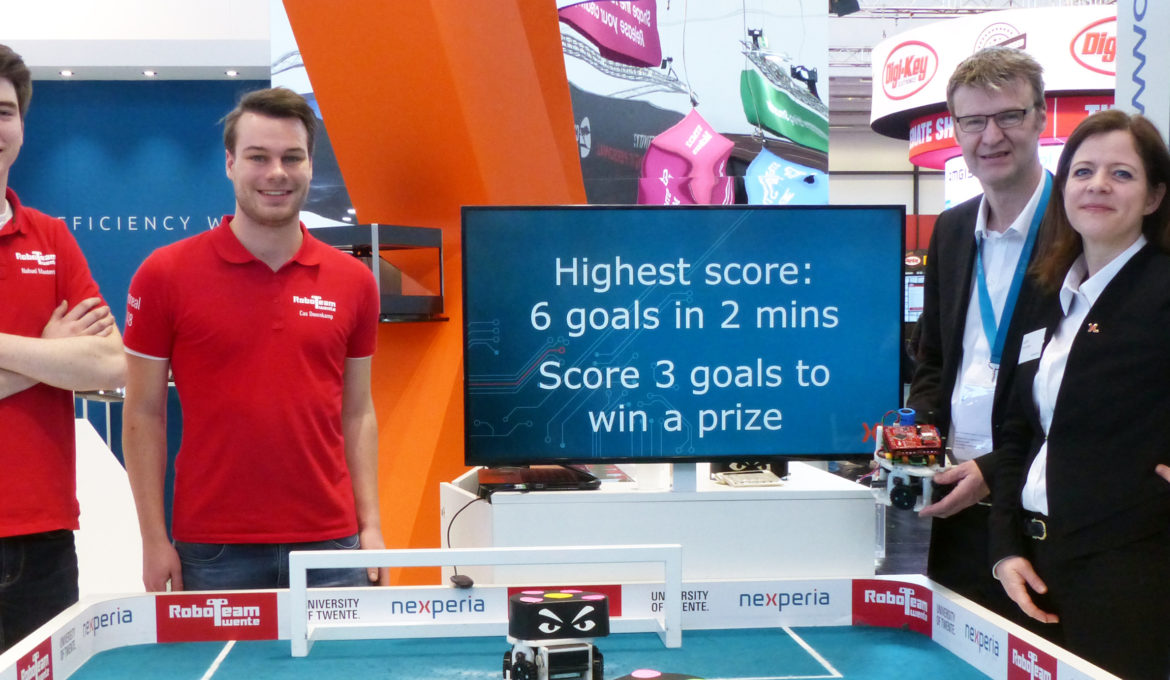 Student Day has become a feature of some German trade shows. Steve Rogerson visited embedded world to find out why.

There is a shortage of electronics engineers in Europe. Companies are struggling to find new talent and many are forced either to pay high wages or recruit from overseas, notably Asia, or both. Germany is no different to other European companies in this regard.

“Germany has a severe shortage of electronics engineers and, as such, they are commanding high salaries,” said Michael Davis, R&D Director at Rohm Semiconductor’s European headquarters near Dusseldorf.

However, Germany has an advantage in that it is also home to some of the world’s biggest electronics exhibitions, such as Electronica in Munich and the recent embedded world in Nuremberg, and the organisers believe in using that advantage to help electronics companies find new talent in what has become known as the Student Day.

While some joke about it being the day to hide away the freebies and some moan that it detracts from doing business, others are happy to see potential recruits dropping by their stands.

“Some years ago we realised that companies were looking for new employees and they were difficult to find,” said Matthias Sturm, Chairman of the Embedded World exhibition committee. “We thought what can we do about getting students close to the end of their studies to the show. So we invited them.”

And not just invite. The show organises coaches from across Germany and neighbouring countries to bring them for free to Nuremberg. These are paid for by sponsors in the industry who get some time with the students before the rest of the show.

One of the sponsors is ARM. “It is good that we can educate the students about ARM technology,” said Reinhard Keil, Director for MCU tools at ARM. “We want them to learn about our technology early on. We are not actively seeking to grab students but we are trying to make them aware of us. But, yes, every year we bring graduates into the company.”

Microchip is also a sponsor and David Wright, the firm’s European Marketing Communications Manager, said that while the company had always had training, now the focus was more on developing and nurturing the students. It has had its own training programmes in the US for more than two decades and has since expanded that to other countries.

“We are now going into a lot more universities with programmes that involve classes on specific subjects such as IoT, wireless and so on,” said Wright. “We have people who are dedicated to education and students. For students, it is about the recognition that we are here. It is creating an awareness of our products. We want them to get used to our products. We are trying to sow the seeds of development.”

He said one of the goals was to show the students that programming was not as complex as they might think. “We want to help them gain knowledge,” he said.

NXP spin-off Nexperia sees sponsoring Student Day as a natural extension of its sponsorship of the University of Twente’s RoboTeam, a multidisciplinary student group that aspires to innovate in both robotics and artificial intelligence. At the show, it had students from the university on its stand with a demonstration robot football game at which visitors could have a go.

“We want to get in touch with students,” said Dirk Wittorf, Nexperia’s Director of Strategic Marketing. “We want to make ourselves attractive to the young talent. We are in so many markets and applications, and that is a sweet spot we can offer to students.”

This was the first time Nexperia had sponsored student day and went into it enthusiastically. As well as the robot football game, the company had HR people and an engineer dedicated to talking with the students.

“So when they do their theses in partnership with an industrial company, we want them to know what we do,” said Wittorf.

Nexperia is setting up a graduate programme in September, which will be run at its sites in Hamburg, Manchester and Nijmegen. They are looking for about 15 students in Hamburg and ten to twelve each at the other two. At Hamburg, the company also works closely with a local university.

“We have an operation in Hamburg where students study at the technical university and they also work in Nexperia for a couple of months,” said Judith Schroeter, Marketing Communications Manager. “We do five people each year on that programme.”

So what do the students think of all this? Well, Fabian Leditzky from the HTBLuVA technical school in Salzburg was in search of information.

“We want to get an insight into what companies are doing,” said Meinfelda. “We may be looking for future employers, but there are so many here.”

Bottler was impressed with one of the talks they had been given that morning. “It was about putting ethics into engineering,” he said. “We don’t get that in our courses, so that was pretty interesting.”

Somebody who had come nowhere near as far was Anna Altman from the local technical university in Nuremberg where she is studying applied sciences.

“I just wanted to take a look at the latest technologies,” she said. “Maybe there is a chance of making some interesting connections for future employment.”

Student Day itself is the last day of the show – the Thursday – and for some students it starts very early. The more far flung set off at around midnight to arrive at the exhibition between 9.00 and 9.30 in the morning. Some did not get back their home cities until midnight on the Thursday.

“For them to do this, you know they are really interested,” said Sturm. “They don’t do that for a free biro and a plastic bag. They do that because they are keen, they are curious, they want to design things. At the end, you see them sitting on the floor completely tired but really happy.”

In the morning, they were locked away from the exhibitors in their own room where they were given a presentation and then a lecture that they can use as part of their studies. They were also given an overview of the exhibition area and an explanation of what embedded systems are all about.

“We don’t focus on the technical systems but on the responsibility of each engineer and what they will do when they finish as a student,” said Sturm.

There were slightly more than 1,000 students, limited by fire regulations. Much of their attendance, including the buses, were funded by the sponsor companies and for their money they got the first chance to speak to the students.

Only then, in the early afternoon, are they let loose on the exhibition floor. “The exhibitors know this is Student Day, so they have HR people on their booths,” said Sturm. “They collect addresses and encourage them to come to their companies. The students get to know that the companies are looking for engineers and are really welcomed.”

He admitted though that there were some companies that did not like Student Day as their priority was doing business.

“That is why we keep the students in a closed room in the morning and only let them into the exhibition in the afternoon,” said Sturm. “The final afternoon of the show is when there are not many others wandering around. At most trade shows, one hour before the end the room is empty, but not on Student Day.”