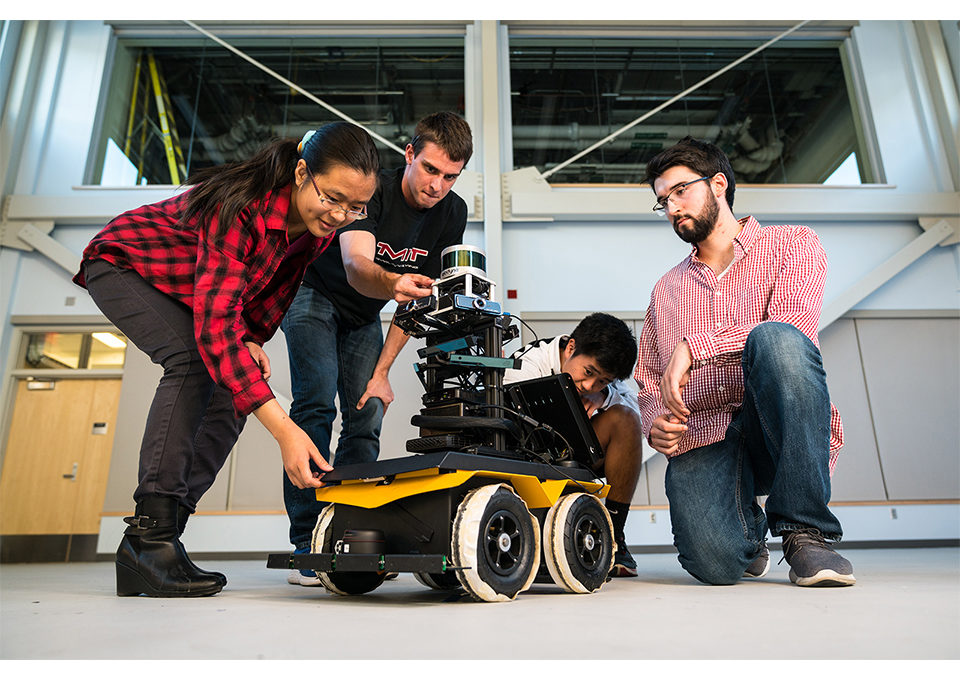 Curriculum focuses on new machines that will address social needs of the future.

To succeed in today’s engineering workforce, students need more than a grounding in theory: they also need the skills and confidence to bring new ideas into reality through interdisciplinary teamwork. That’s what the MIT School of Engineering aims to provide with a hands-on curriculum called New Engineering Education Transformation (NEET).
“You have to jump in and learn by trying things, by making the mistakes that everybody makes the first time they try to solve problems,” says Anette “Peko” Hosoi, associate dean of engineering and the Neil and Jane Pappalardo Professor of Mechanical Engineering. Hosoi is the faculty co-lead of NEET with Ed Crawley ’76, SM ’78, ScD ’81, Ford Professor of Engineering in the Department of Aeronautics and Astronautics.

Learning by doing has always been an important ingredient of MIT education, but according to Amitava “Babi” Mitra, NEET’s executive director, NEET’s approach sets it apart. “Most engineering curricula in the world, including at MIT, focus on the more traditional machines”—for example, designing and manufacturing a 1950s-era plane such as a Boeing 707, he says, while consigning new technologies such as quadcopters and self-driving cars to a single class or two. In contrast, NEET aims to educate young engineers to build the new machines that will address social needs of the future.

The 120 students who have begun NEET since it launched in fall 2017 will earn a degree in their chosen major within the usual four years, while spending sophomore through senior years immersed in machines and systems under development in modern industry. Emphasizing disciplinary breadth as well as depth, NEET offers a rethinking of the existing engineering curriculum, while retaining the strengths of “mens et manus.”

According to Living Machines lead instructor Timothy Kassis, a typical undergraduate series of labs, classes, and internships can add up to “experiences that are valuable but that don’t necessarily tell a coherent story. When our NEET students graduate, they will have a story they can talk about.”

In its first year, NEET piloted two cross-departmental threads, or learning pathways: Autonomous Machines and Living Machines. Two more begin this fall: Clean Energy Systems and Advanced Materials Machines. The four threads were proposed and assessed by engineering faculty assisted by faculty from MIT’s other four schools. A students’ chosen thread will be named on a NEET certificate bestowed as a new credential upon graduation.