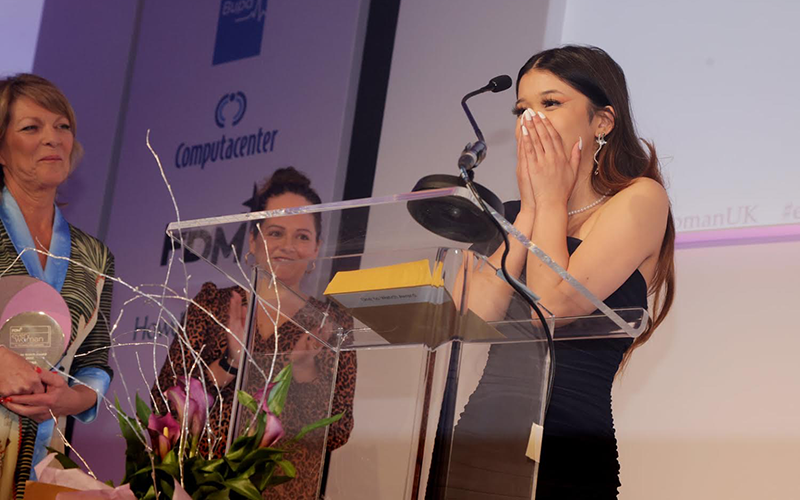 Student Circuit interviewed first year Computer Science student at the University of Sheffield, Lea Button. Lea recently won the One to Watch Award from the FMD everywoman in Technology Awards.

Lea was nominated by the computer science department of her secondary school, Queen Anne’s, Reading, for the work she achieved introducing cybersecurity to the younger years.

Lea created a lesson plan, following the story of a dinosaur with a secret. Every lesson, students learn a new concept of cybersecurity, for example, the first week introduces encryption and ciphers. After learning the content, students participate in exercises to decipher the dinosaurs encoded secret. As the weeks progress, the students learn more complex ideas, and the dinosaur gets better at hiding its secrets.

Winning this award was a defining moment for Lea. She explained it was surreal and meaningful to be at the awards ceremony with so many other incredible people. It also validated what she was doing, as before, Lea doubted the impact she was making: “The award proved to me that I am making a difference, even if it’s a small one.”

Having always had an interest in STEM, Lea explained there was no specific ‘wow’ moment that she could recall. She always enjoyed STEM subjects, especially maths, physics and computer science, and many things contributed to where she is now.

A big thing however was attending three Cyber First summer courses throughout her GCSE summers: “Those were really big because it was the first time I’d been surrounded by people that shared a similar interest to me.”

Lea attended a small, all-girls school where she noted that there were few, if any with shared interests in STEM.

“For it to be flipped around and be in an environment where everyone liked the same thing as me was a big thing. It came at the right time as well because I was starting to get slightly disinterested, but the courses made me realise this is the space I want to be in,” said Lea.

Lea received immense support from her parents, who she said would have supported her no matter her chosen career path.

Speaking about her computer science teachers, Lea said: “I’m so grateful for them, I’m so priviledged to even have them and its lucky to have one, let alone two. They were absolutely amazing.”

Lea was also the only person doing the computer science alevel in her cohort, which was of course in some ways incredible as she benefited from one-on-one lessons. Sometimes, this was quite lonely for Lea, and at times she lacked motivation, however she received a lot of support and attention that other students might not have.

Highlighting the importance of encouraging girls into STEM careers, Lea said: “My old school has this amazing department, but if feels like a waste because all these people who want to encourage girls into computer science aren’t getting the interest they deserve. For the benefit of not only girls who want to be within the industry, I think its important to keep pushing for more women in technology.”

Lea can recognise the difference she’s making already from her work but hopes that she doesn’t reach her peak point in the next few years: “I don’t want to be thinking in five years’ time that I’ve made the biggest difference I can make, I still have my whole career ahead of me.”

Lea hasn’t finished with working with her secondary school yet. Following on from the syllabus she created, she is working on creating a platform to host cybersecurity competitions.

“The goal is that not only can they host them within the school, but to host competitions in the wider area and get more schools involved,” Lea said.

“My school by itself is a small demographic compared to reaching and influencing more people beyond that. I definitely want to reach more people outside of this bubble,” she added.

Lea is also currently interning with Nerdle, assisting on its mission to get Nerdle used as an educational tool.

Thinking more long term, in the next five years Lea hopes to have graduated and b working within cybersecurity.

Having asked Lea how others can get involved and feel as though they are making a difference, Lea said things as small as offering words of encouragement or congratulating someone on something they’ve done can help: “Being supportive and encouraging towards young girls makes a difference. I know it did for me.”

“It’s daunting going into STEM, the little bits of support and small comments will make a big difference, particularly at a younger age. You tend to remember when people say kind, supportive things,” said Lea.

The next time that someone around you achieves something in the world of STEM, offer some kind words of encouragement. This could be the difference between a young girl pursing a career in STEM, or not.

“I don’t think it has to be these huge initiatives or anything like that. Its as simple as being supportive towards young girls and women in STEM, it all adds up,” said Lea.

To young girls out there..

Lea said she would tell her younger self, and anyone else in a similar position, to stick with it and keep going: “It gets really hard, particularly as a young girl going into STEM, especially when you’re younger.”

Speaking about her experience with younger boys, Lea explained that sometimes it can be quite a brutal experience working in a male dominated environment: “Trying to get yourself heard and taken seriously can sometimes be demoralising, but as difficult as it is, you need to persevere.”