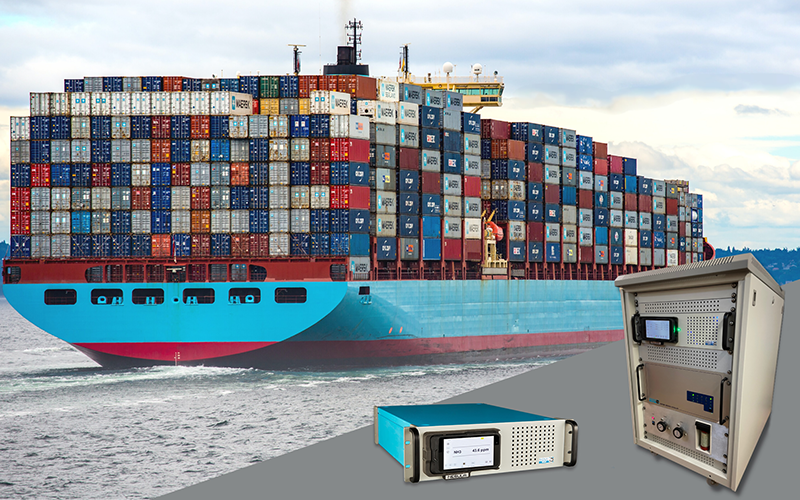 The global stampede to develop clean energy sources has prompted a demand for ammonia analysers from the developers of engines that will be capable of using ammonia as a fuel.

“Many of our customers already use Signal Group NDIR, FID and CLD analysers to measure the emissions from incinerators, engines, burners and stoves,” commented Signal’s Stephane Canadas. “However, as countries seek to decarbonise their economies, ammonia, produced by green hydrogen, offers a carbon-free alternative to fossil fuels, and the accurate measurement of emissions is an essential component of any engine development program.”

The COP26 climate conference in Glasgow highlighted the insufficiency of the greenhouse gas emissions (GHG) reductions promised by the world’s nations in their nationally determined contributions (NDCs). Consequently, nations and the world’s leading organisations are urgently looking for ways to further reduce emissions, and a reduction in the use of fossil fuels is one of the more obvious alternatives. So-called ‘clean energy’ sources are therefore being rapidly developed, and green hydrogen, produced by the electrolysis of water using renewable energy, offers enormous potential in the decarbonisation of the energy sector.

In the US, President Biden is seeking to build a modern, sustainable infrastructure and an equitable clean energy future, by “using renewables to produce carbon-free hydrogen at a lower cost than hydrogen from shale gas through innovation in technologies.”

The two predominant sources of renewable energy are wind and solar. However, these do not deliver a reliable, consistent 24/7 supply of energy, and are not often located close to the areas with the greatest energy needs. Hydrogen is therefore attractive, because it represents a means with which to store renewable energy. However, ammonia has a higher energy density (12.7 MJ/L) than liquid hydrogen (8.5 MJ/L), and liquid hydrogen requires cryogenic conditions (–253 °C) or very high pressure, whereas ammonia can be stored at a much less energy-intensive –33 °C or it can be pressurised to about ten times atmospheric pressure. Ammonia is also less flammable than hydrogen, although it is more toxic.

Hydrogen can be converted to ammonia via the Haber-Bosch process which reacts hydrogen with atmospheric nitrogen under pressure. Historically, this process has been employed to manufacture agricultural fertilizers using natural gas (fossil fuel) as the source of hydrogen. However, this process is energy intensive and produces high levels of carbon dioxide (CO2), a greenhouse gas.

In the past, ammonia has been regarded as a useful medium for the transport of energy, so that it can be cracked into nitrogen and hydrogen at the point of delivery. However, the potential for ammonia to be employed as a fuel in a number of different applications is now urgently being investigated. These include power generators, shipping and heavy transport vehicles such as buses.

It has been estimated that green ammonia will cost two to four times more to produce than conventional ammonia (steam reformation of methane in natural gas). Nevertheless, it is anticipated that green ammonia costs could drop significantly after the scaling up of production. Importantly, however, the engines that will be required to run on ammonia are mostly still under development, and this is driving the requirement for ammonia analysers.

Research conducted by Lloyds Register and University Maritime Advisory Services (UMAS) in 2020 provides an assessment of the readiness of ammonia as a shipping fuel in comparison with alternatives such as hydrogen, methanol, biofuels, and batteries, and fossil fuels such as natural gas and HFO. The research found that ammonia produced from natural gas combined with carbon capture and storage (blue ammonia) is the lowest cost zero-carbon option when considering timeframes to 2050.

The International Maritime Organisation (IMO) has adopted a new regulation to drive the decarbonisation of global shipping. Scheduled to be enforced by 2023, New Regulation 28 mandates: “a linear reduction in the in-service carbon intensity of ships between 2023 and 2030, such that the global fleet achieves an average reduction of at least 40% by 2030 when compared with 2008”. The use of ammonia as a marine fuel is therefore being vigorously investigated by the sector.

With over 45 years of experience in the development of gas analysers for emissions monitoring, Signal Group was asked to develop an ammonia analyser that could be used in the research and development of ammonia powered engines. The requirements for this application included features such as high selectivity for ammonia, fast response time, low maintenance/calibration requirement, long-term reliability, and the ability to measure a hot/wet gas continuously.

Stephane Canadas said: “TDLS meets all of these requirements, so we built the analyser into our Series 4 range, which provides customers with a host of other advantages. Not least of which is the provision of a detachable Tablet, that enables users to operate the analyser wirelessly from a convenient location nearby, using the instrument’s built-in Wi-Fi. This is an extremely popular feature with engine developers.”

In addition to wireless connectivity between the analyser and the Tablet, all Series 4 instruments are supplied with software providing simple and secure access via RS232 or Ethernet at any time, from anywhere. “This means that engine developers can check the progress of their work, without having to be physically present in their workplace,” Stephane added.

Ammonia has different combustion properties to most traditional fuels, which is why research is necessary to develop a suitable combustion method. For example, ammonia burns more slowly, so it is important to ensure that significant amounts of ammonia are not emitted in the exhaust. Not only is ammonia toxic, but it also has an unpleasant odour.

The combustion of ammonia should ideally produce harmless emissions containing just nitrogen and water. However, it will be necessary for engine developers to continuously monitor the ammonia content of prototype engines’ emissions to ensure that ammonia combustion is complete. In addition, it is necessary to measure NOx gases, because these gases are harmful to the environment and human health. For example, the combustion of ammonia can generate nitrous oxide (N2O), a GHG even more potent than CO2. Signal Group’s customers therefore also operate the S4 Quasar Heated vacuum Chemiluminescence NOx analyser, or the S4 Pulsar NDIR Multi-gas analyser if a broader spectrum of gases needs to be measured.

Green hydrogen provides an opportunity to harness excess renewable energy, and when converted to ammonia, it can be easily stored and transported. Similarly, blue ammonia may represent a viable alternative. Technically, it is possible to reform ammonia into hydrogen, but it may be more efficient to develop engines that are able to run on ammonia.

Global ammonia distribution and storage infrastructure is already in place; to meet the needs of agriculture and industry, but significant upscaling will be necessary if ammonia is to become a sustainable fuel. In addition, new regulations will be necessary in order to protect safety, prevent harmful emissions, and optimise reductions in GHG emissions.

Ammonia is one of the most promising clean energy sources; reducing reliance on fossil fuels, whilst requiring less storage space and energy than hydrogen. The development of engines that can run on ammonia is therefore vitally important, so the availability of an ammonia analyser designed specifically for this application, is an advantage for researchers and engine developers.