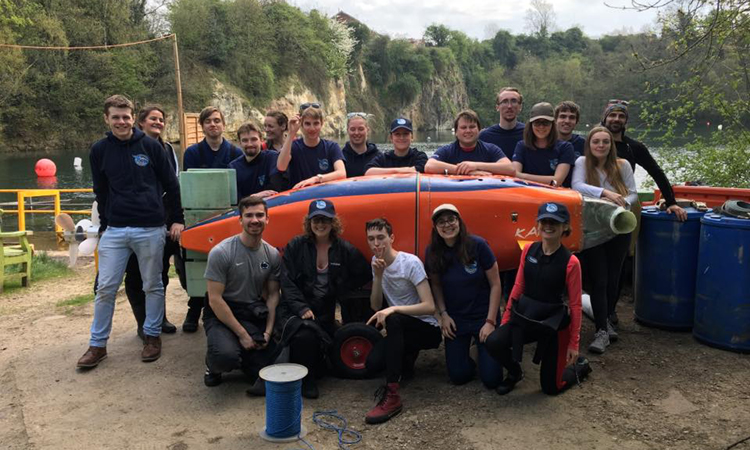 A team from the University of Southampton working on submarine technology is receiving engineer support and engineering-grade plastic bearings through the igus’ YES (Young Engineers Support) programme. The Southampton University Human Powered Submarine Society (SUHPS) is a group of students that design, build and test human-powered submarines to compete internationally.

The international races were created to encourage young people to fill the shortfall in marine engineers. Each team designs and builds a flooded submarine from scratch to compete in the races every year. The pilot (a single scuba diver) pedals and steers the sub around an obstacle course in a timed race. Founded in 2014, the team competed in its first year at the 2015 International Submarine Races (ISR) in Washington DC with the University Of Southampton Ship (UoSS) Orca. The team returned two years later with the UoSS Kaiju.

The team consists of around 20 undergraduate students studying a range of disciplines including Mechanical Engineering, Mathematics, Oceanography and many more. The team itself is organised into five sub-teams, each of which specialises in one area of design/manufacture. These are: Hull and Life Support; Transmission; Propulsion; Control and Diving.

As the ISR event is held once every two years, to fill the year gap, SUHPS entered the European International Submarine Races (eISR) with UoSS Nauti Buoy, which took place earlier this year in Gosport. Sadly, the team was pipped at the post for qualification, however, it was a good proving ground to prototype major developments for future submarine systems ready for ISR 2019.

“The contra rotating gearbox developed over the past year was successful as a proof of concept of the design,” explained Caroline Layzell, who co-leads with Transmission Team alongside Gareth Caine. Both are fourth year students studying mechanical engineering and aerospace engineering, respectively. The remainder of the team is made up of first year mechanical engineering students Toivo Saabas and Mridul Ahmed.

During the qualification sessions, a few teething problems were discovered. The initial gear ratio (4:1) selected was too high, making it difficult for the pilot to pedal. There was also unwanted sliding of the gears, which was caused by the supporting frame bending under the high loads caused by the pilot’s pedalling. This meant that the loading path through the gears was sub optimal, reducing the efficiency of the overall system.

“This academic year, we are using vastly different gear ratios and dimensions and more precise manufacturing methods such as water jet cutting for the mounting plates,” said Layzell. “We have reduced the initial gear ratio to 2:1, which will make the pedals easier to push for the pilot, and redesigned an entirely new frame to house the gears.”

Within the transmission system, xiros bearings are used to ensure smooth rotation of the propeller and crank shafts where they pass through the outer walls of the gearbox. “The beauty of the xiros bearings from igus is that they are plastic, and a plastic bearing does not corrode underwater,” explained Layzell. “This is really useful for extending the life of the systems we make.”

There are also tight restrictions on the lubricants and oils that can used on the submarine during the race to remove the risk of contaminating the water in the competition tank. “The fact that the xiros bearings are lubrication-free makes them even more applicable for our submarine application and is what sets them apart from other bearings on the market,” added Layzell.

Pilot ergonomics have been another key area under development this year – a comfy pilot is a faster pilot, after all! Feedback from previous pilots has led the team to design a narrower gearbox to resemble the ergonomics of a bicycle, with an overall 30% reduction in width compared to last year. “We’ve also made the transmission adjustable, a bit like how a car seat moves forward and backward to accommodate different height drivers,” added Layzell. With the new transmission design completed, the team now enters the manufacturing and assembling stages. The final challenge will be to mount the system into the submarine.

As for the other parts of the submarine – the new submarine shell is designed by Hull Team Leader, Euan French. Over the last few months he has been running CFD calculations on potential hull designs to ensure that the new shape optimises the trade-off between drag and space for the pilot. It is currently undergoing fibreglass lay-up and, once ready, work on installing the control surfaces and the transmission system will commence.

Despite just missing out on qualification, the SUHPS team did get to visit the races this year, and a lot of its members volunteered during the event, both at the pool side and in the organisation of the races. Gareth, Euan and Tim Holgate, all attended the competition as a support engineer, intern, and support diver respectively. All three roles involved some aspect of liaising between the competing teams and officials and staff members, be that for engineering solutions and supply runs, or underwater safety checks and preparation. “All members that attended the races dived right into the heart of the competition and feel they learnt valuable lessons, be it in teamwork, engineering, diving or logistics,” adds Caroline.

The team is confident that experience gained through failure will put them into good stead for ISR 2019. During which the competing team will be of around ten people, consisting divers and engineers. To ensure that the pilot is safe, there must be a few support divers on hand. Also, engineers that know and have worked on the systems are there is support in the event of any emergency tweaks or repairs.