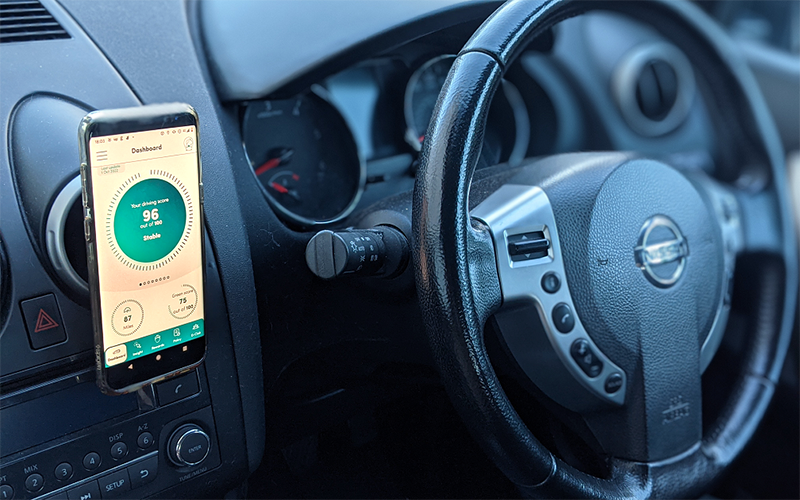 An app which uses AI to monitor real-world driving conditions and accident data, along with driver and vehicle profiling, has been enhanced by the University of South Wales (USW) and a Cardiff-based car insurance service.

Once the system has been developed further, its designers are hoping it could help young drivers slash the costs of motor insurance by proving they are safe on the roads.

Working with the USW-based Centre of Excellence in Mobile and Emerging Technology (CEMET), Driverly Insurance has developed the app as part of the company’s mission to deliver safer UK roads whilst rewarding good driving behaviours.

The Driverly app monitors and records dozens of different driving criteria for users to build an accurate picture of their driving habits, which can directly benefit them financially.

After initially monitoring an individual’s driving, Driverly has now added further layers to its tech offering, thanks to the specialists at CEMET. As well as recording driving behaviour, the enhanced app can also draw on accident profiling of all the major roads in the UK, combined with real-time weather forecasts to build an AI-powered view of real-world driving conditions, thereby building a risk profile with a level of detail not seen before.

Nestor Alonso, Chief Data Officer at Driverly, worked closely with the CEMET experts on the development.

“Having already designed and built the app, Driverly approached CEMET to take it to the next level. CEMET has added a separate layer around users’ driving context: the road conditions and the weather conditions – which has never been done before in the insurance industry with an app.

“With these added layers, we will be able to offer the most advanced real-time risk analysis of young drivers, thereby offering them insurance premiums that really do reflect their driving habits and – crucially – their driving environments.

“This is great news for young drivers, and great news for the insurance industry. We are taking a lot of the guesswork out of insuring younger drivers who traditionally struggle to find competitively priced insurance policies. At the same time, we are helping to encourage safer driving among our customers, and directly rewarding that care and attention with lower premiums and other rewards.”

For the CEMET specialists, working on Driverly’s project provided new challenges to their expertise.

“The Driverly project was really interesting; it’s nice to engage with a company that’s pushing the boundaries,” said Seamus Ballard-Smith at CEMET.

“The project itself was conceptually straightforward but came with several technical challenges. Combining data from multiple sources into a single platform requires time to finesse all the disparate data into a single database, and then developing risk calculation algorithms, was great fun.”

The relationship with CEMET was also a great experience for the Driverly team. “It’s not 10 out of 10 because it was too short. I enjoyed it so much,” said Mr Alonso.

CEMET enables eligible SMEs in Wales to access funded collaborative research & development via a unique three -stage R&D process, which transforms an innovative idea into a high-quality product. The process ensures that entrepreneurs are best placed to capitalise on the collaboration, with the aim of stimulating business growth.

CEMET is part funded by the European Regional Development Fund (ERDF) through the Welsh Government.