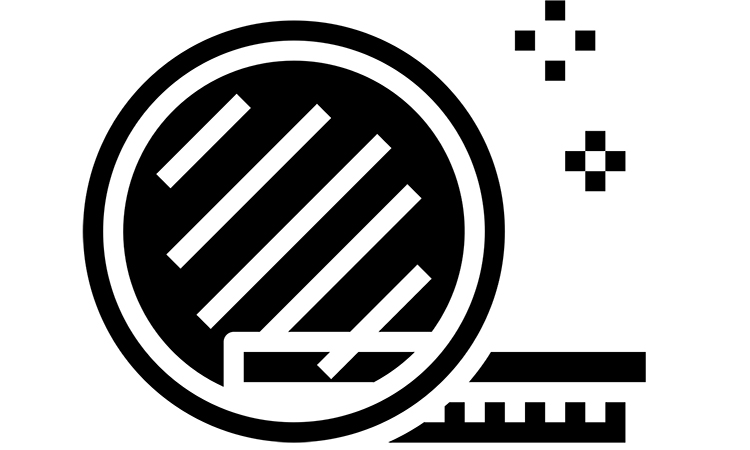 When light penetrates the semiconductor, it starts the process of exchanging energy with crystalline lattice. Let us determine I as a light intensity. Part of light flow is reflected from a surface of a crystal.

At the normal incidents of the light rays on the semiconductor, the absorption coefficient can be found by the formula:

, where n is a refractive index of a material.

Dependence of absorption coefficient  from wavelength and photons energy is called the spectrum of compound absorption. Irradiation absorption in a semiconductor can be related to the change of state of free or bound electrons, and also to the change of oscillation energy of lattice atoms. Semiconductors have several mechanisms of optical absorption, and every mechanism corresponds to some exact part of an absorption spectrum.

Transitions not allowed by the selection rules are also possible. However, their possibility is lower. The law of conservation of momentum works here, because there are three ‘particles’ that take part in the transition process – electron, photon and phonon. Phonon is the quantum of the oscillation energy of the lattice. Phonon compensates the difference of electron energies in the initial and final states. These transitions are called indirect transitions. In this case excessive momentum transmits to the crystalline lattice. And as far as to make indirect transitions, quasimomentums of three particles should match, this transition has lower possibility than for direct transition.

Exсiton absorption. In some semiconductors during absorption of photons, excitons may appear with special excited electron states of a valence band. Exciton is a system of connected electrons and holes by their intrinsic electrostatic interaction. Energy levels of an excited electron and a hole are usually lower than the bottom of conduction band. It means that exciton energy is less than the forbidden band width.

Exciton can wander across the crystal from one atom to another. Exciton is a neutral combination of electron and a hole. Weak external electromagnetic fields cannot destroy it, or change its trajectory gradually. During collisions with impurity atoms, exciton can break and create two charge carriers, or recombine with the hole and put atoms into a non-excited state. The first will happen if to give an exciton enough energy to move the electron from exciton level to conduction band – with quantity of energy irradiation. This quantity irradiates in the form of phonon usually.

Light absorption by charge carriers. This mechanism of charge carriers from one energy level to another is due to the light quantity in a semiconductor. Charge carriers make oscillations aligned with the electromagnetic field. Accelerating by the field, they collide with the crystalline lattice atoms, giving them kinetic energy. Absorption intensity rises when light wavelength increases.

Light absorption by impurities is due to ionisation or excitation of impurity atoms in the crystalline lattice. For this mechanism light quantity energy wastes when moving electrons from the donor level to conduction band, or from valence band to acceptor level. Impurities ionisation energy is far less than the forbidden band width, impurity absorption of the light is shifted into the infrared field of the spectrum, and can be observed only at low temperatures.

Spectral region between intrinsic and lattice absorption is transparent, so pure semiconductors can be used as light filters.

Where Δn and Δp are non-equilibrium concentration of charge carriers resulted by optical excitation of semiconductor.

The rate of charge carrier optical generation g0 is determined by the light intensity:

g0 = ŋ0αI, where ŋ0 is a quantum yield of the internal photoelectric effect.

Quantum yield of the internal photoelectric effect is a quantity of charge carrier pairs. In the photoactive part of the spectrum, quantum yield is usually equal to 1, when the energy quantity creates one pair of electron holes.

Photoconductivity relaxation. Changing of electrical properties for semiconductors has a temporary nature. After termination radiation, conductivity returns to the value before radiation begun. Knowledge of inertia of photoconductivity helps during electronic component design. Let us consider rectangular light impulse affecting the semiconductor.  A decrease or accumulation of non-equilibrium charge carriers determines the difference of generation and recombination rates of charge carriers. Figure 19.

The same formula works for photoconductivity:

When light radiation stops, photoconductivity is determined only by the  recombination rate. And steepness of increment and decrement fronts of photoconductivity (Figure 19) depends on the non-equilibrium charge carrier’s life time.

Luminescence. Luminescence is a non-heating electromagnetic radiation, with a life time longer then the period of light oscillations. Luminescence should be differentiated from heat solid radiation, processes of light dissipation and reflection, and others. As luminescence is a non-equilibrium process, so the semiconductor should be excited to experience phenomena. During luminescence, the processes of exciting and light radiation are separated in time and space with some intermediate processes. That is why we still can see some light radiation after exciting termination. Compounds, characterised by luminescence phenomena, are called phosphors. Phosphors are usually semiconductors with a wide forbidden band. Depending on the excitation source, phosphors can be divided by three groups:

Most of the recombination processes in a semiconductor are non-radiant, when energy quantity is transferred to the crystalline lattice. To reach a proper luminescence effectiveness, recombination processes should be under control. Luminescence may occur in a semiconductor with a forbidden band wider then 1.7eV. Some wideband semiconductors have such a high resistance that they can be categorised as insulators. Radiation quantum transition may happen spontaneously and forcibly. During spontaneous transitions, photons emissions do not depend on external factors. Acts of spontaneous radiation occur independently of each other, and spontaneous radiation is non-coherent. Forced quantum transitions occur under the influence of external electromagnetic fields with some exact frequency. Emitting photons and forced radiation have the same frequency, polarisation and phase as a forcing radiation, forced radiation is coherent.