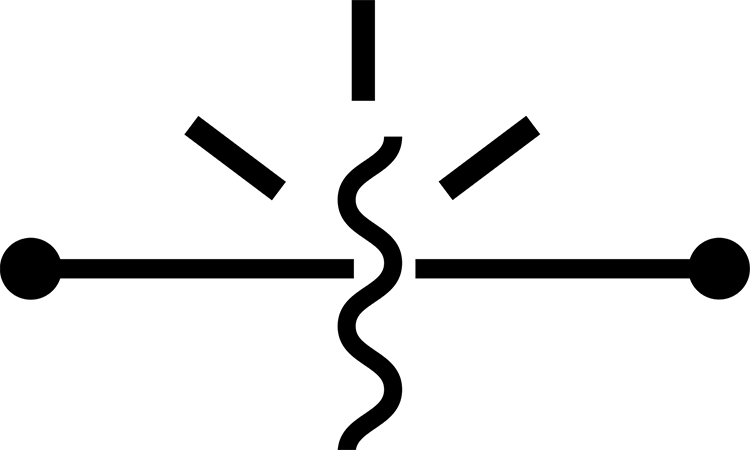 If breakdown occurs in a dielectric gas, and the electric was turned off after that, the gas can restore its insulation capabilities. Solid dielectrics can not restore insulation capabilities after the breakdown, as their insulation gets destroyed. Dielectric breakdown may happen as a result of electric, thermo or electrochemical processes in an insulator in the electric field. Breakdown of air and other gases is a result of strike and photoionisation.

The mechanism of breakdown in gas

Some amount of electrons and ions in gas obtain additional speed and energy in an electric field. They move along, or opposite, the electric field, depending on the charge sign. Additional energy for a particle is:

Additional energy also goes to the particles, colliding with them. And neutral atoms are ionising. The condition of ionisation is E > Ei, where Ei is an atom ionisation energy. Ionisation energy is characterised by ionisation potential:

Ionisation potential is in the range 4-25V for different gases (or 4-25eV ionisation  energy).

When temperature and pressure are fixed, strike ionisation appears at some exact level of electric field, because q and l are fixed for gases. The larger the voltage applied to a gas, the faster breakdown occurs. If the impact on voltage is short, the breakdown voltage rises. Gas breakdown depends on the uniformity of the electric field. Uniform electric fields can be between electrodes with rounded edges, or between spheres, when the distance between them is smaller than their diameter.

For distance, one centimetre breakdown can occur at some exact level of temperature and pressure in 10-7 sec. First an electric spark appears between the electrodes that transforms into electric arc. Breakdown in non-uniform fields differs from breakdown in uniform field. Non-uniform field occurs between two electrodes with different shapes, like cutting-edge and plane, between wires, or spheres with a big distance between them. Gas breakdown features in non-uniform electric fields. First partial crown shock appears between electrodes in the electric field points with  maximum level of field, and it then transforms into a spark and then an electric arc when the field increases.

As an exercise, think and explain why breakdown is easier to make on the cutting-edge, than on the plane (in case of non-symmetrical electrodes cutting-edge-plane). What polarity should be on each electrode and why?

Liquid dielectrics are characterised by bigger electrical strength gases. Liquids usually contain impurities like water, gases and small particles of solids. It hinders the breakdown phenomena. High electrical strength of dielectric liquids is caused by a smaller travel path for the electrons in a liquid, than in the gas. Breakdown in clean liquids can happen because of overheating and liquid boiling in the places with the biggest concentration of impurities. Breakdown in a liquid at radio frequencies may occur during overheating caused by dielectric losses, and leads to dielectric liquid destruction. This is the reason why dielectric liquids are used at the frequencies lower than industrial ones.

Solid dielectrics may perform three kinds of breakdowns: electric, thermal and electrochemical. Each breakdown type occurs in the same semiconductor with different temperature and pressure, depending on the electric field, voltage, its intensity and duration, frequency and other parameters. Electrical breakdown of solid dielectrics is characterised with rapid growth. It grows for only 10-7 – 10-8 sec. Electric breakdown is an electric process.

Electric avalanche gradually and rapidly forms from the small amount of electrons in a solid. Growth of electronic avalanche is accompanied by photoionisation that accelerates the creation of conducting channel. Electrons are accelerated by an electric field, colliding with a crystal lattice, heating it till a melting state occurs. Pressure in the conduction channel leads to the cracks in a solid and its destruction. Electric breakdown is possible when conductivity and dielectric losses are absent in a solid.

For uniform solid dielectrics in a uniform electric field, electric breakdown can be a measure of electrical strength of a solid. Thin films may have bigger electric strength than bulk solids. This feature of thin dielectric films is widely used in microelectronics for insulation. Thermal breakdown occurs when thermal energy in a solid dielectric grows to the level bigger than can be dissipated by the dielectric, and the solid overheats. This process becomes avalanche manner.

Ionisation breakdown is a type of thermal breakdown. It’s typical for pored dielectrics, and breakdown occurs because of gas ionisation in pores. Pores surfaces are heated, which causes local temperature difference across the solid. This process may lead to the destruction of the solid. Electrochemical breakdown makes sense at high temperatures and humidity. This type of breakdown occurs in solids at AC and DC voltages at low frequencies, when the processes of declining isolation appears in a solid. Electrochemical breakdown takes some time, and is related to a solid conductivity. There can be a surface breakdown at solids with high electric strength. This is a breakdown of liquid or gas on the bulk solid surface, and the conducting channel occurs on the solid surface. Surface breakdown voltage is determined by the form of the solid and electrodes, their configuration and size.