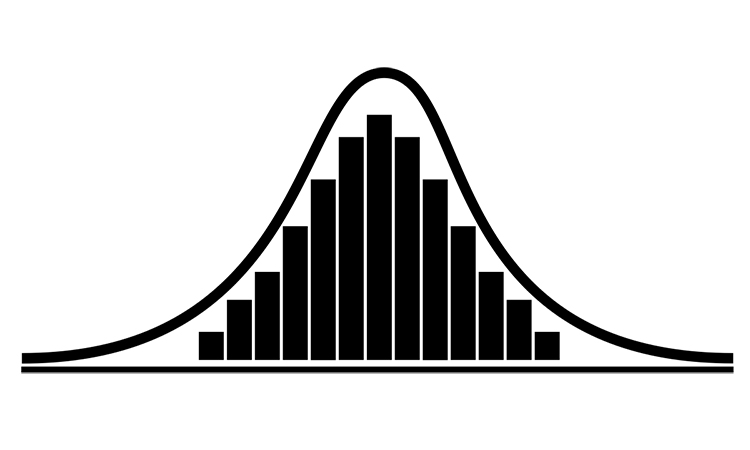 The Coulomb Law and superposition principle can lead to divergence theorem which is valid for bilateral, axial and spherical charged objects. Let’s divide the surface , by the parts . Module of is equal to the square of  (Figure below), and is directed along the normal .

Elementary flow dФ of the electric field  through the piece of surface is a  .

En is a  projection on the normal  to the surface element . To simplify this case, the electric field flow is a scalar multiplication of the vectors  and :

So the electric field  that flows through the surface

Based on the conclusions above, Gauss theorem can be introduced. Gauss theorem states the following: electric field flow  in a vacuum through the closed surface ∑ is proportional to the total charge of this surface:

3. System of N point charges is placed inside and outside of the closed random form surface. Every single charge inside the surface creates electric field flow  .

In the case of extended one-, two- or three-dimensional charge, integration must be used in Gauss theorem instead of sum sign. So curved, surface or volume integral will be used:

where  –are linear, surface and volume charge density;  – space areas have distributed charge.

The most comfortable way to use Gauss theorem is when the system is characterised with flat, axis or spherical symmetry – where you can switch from the surface integral to the multiplication of scalar quantities  and .

There is a potential difference in electric field id scalar value. It is also an electric field characteristic, and it is very useful, as it is easier to use scalar quantities. We consider all the charges in an electrostatic field, when electric forces in electrostatic fields are conservative. Forces are considered to be conservative if their work does not depend on the object of the force movement trajectory. This work is determined only by initial and final coordinates of a moving object.

Stationary point electric charge is the source of central field force. According to the superposition principle, work wasted on the movement of a single charge in the system of stationary charges is equal to the algebraic sum of works from all the separate charges. This field is also a field of conservative forces. So work of electrostatic forces characterises the electric field, and depends on the considered charge.

The measurement unit is Volts (V). So work needs to be done to move charge q from point 1 to point 2:

A potential difference is the energy characteristics of an electric field.

Let’s consider the point in space  where the electric field is absent and  .

Let’s express the field work    as characteristics of the field E.    and

In this case .  Potential energy of a point charge in the electric field is .

For two point charges  and  interaction energy is .

then  .  Here are equipotential surfaces for cases we discussed above. (Figure below).

Field potential of a system of point charges is characterised by the superposition principle .

The proof of this statement is based on the facts that the potential of a field is work that needs to move a charge to the point of space where the field is equal to 0. And in the fact that work is an additive term. For system of charges in the field (Figure below).

Let’s use the potential superposition principle for calculating field potential on the axis of a charged circle, with radius R and charge q, where x is the distance from the circle’s centre. (Figure below). 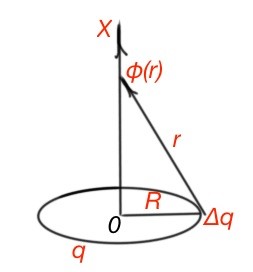 The circle can be divided to the point charges . And according to the superposition principle .